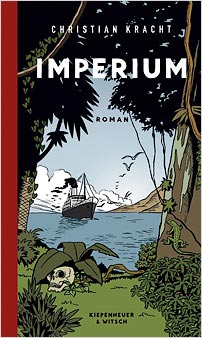 A Small Empire is a stylistically accomplished novel on an unusual theme, which caused a stir in Germany even before its publication.

In the early twentieth century, August Engelhardt sets sail for the Bismarck Archipelago (now Papua New Guinea) where he intends to set up a coconut plantation and found a colony of ‘cocoivores’. On arrival he takes possession of Kakabon Island for an exorbitant fee, strips off his clothes and undertakes to nourish himself exclusively on coconuts and sunshine. He also acquires a manservant, Makeli, and indigenous labourers for his plantation. Engelhardt’s affinity with nakedness, sunshine and the coconut is a philosophy: he has written a tract on the benefits of sun worship and cocoivorism, and he sends enthusiastic letters to vegetarians back home, encouraging them to join him.

His first visitor is a first-class villain, who rapes Makeli and winds up dead. Was he struck by a falling coconut, murdered by Makeli, or did Engelhardt himself smash his skull? The truth vanishes ‘in the mists of narrative doubt’, but Makeli’s devotion to his master is stronger than ever. Other visitors arrive, including the musician Max Lützow, who turns up with a piano and lives happily on Kakabon until a host of would-be converts descend on the main island nearby, set up a temporary colony, and succumb to malnutrition and disease. The idyll is shattered and Lützow is driven off the island by the scheming Makeli. By this point, Engelhardt is undernourished, covered in sores, suffering from leprosy and very likely insane. A sailor is hired by the German colonial governor to assassinate him, but cannot go through with it. The First World War breaks out and the islands are occupied by the Australians. Engelhardt continues to live alone on Kakabon and is discovered decades later by American troops at the end of the Second World War.

The story of Engelhardt is told by a narrator who hypothesises about his state of mind, informs us of the protagonist’s thoughts, and looks backwards and forwards in history, linking Engelhardt’s story to wider events and to other figures in twentieth-century history. Kracht was charged in one review of right-wing sympathies in Imperium. This has unleashed a wave of critical voices in favour of the novel, arguing that to read it in this way is to miss the narrative’s fundamental irony. The controversy continues.

Christian Kracht was born in Switzerland in 1966. His novels have been translated into more than twenty languages.