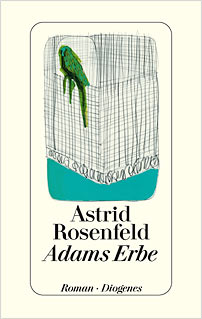 This wonderfully energetic and funny debut is a powerful and compelling story, establishing Rosenfeld as an exciting and original new talent. With comic brio, Adam’s Legacy dashes to the heart of the story of eight-year-old Eddy. Little is known about his father; his mother, the ‘antichrist of feminism’, just wanted to get pregnant. However, Eddy is told by his grandparents, Lara and Moses, about his uncanny resemblance to his great-uncle, Adam Cohen.

This narrative door is left on the latch during a wonderful detour in the company of Jack Moss. Eddy stumbles across this ‘Elvis’ in Berlin Zoo, quickly falls under his charm, and coughs his way through his first cigarettes near the elephant enclosure. Despite spirited opposition from Lara, his mother also soon falls into Elvis’s arms. They begin an itinerant life around Jack’s business interests, mainly selling fake fossils to frustrated housewives, during which Eddy often skips school for alternative history lessons with his new father.

Years later, after Moses’ death, Eddy discovers a manuscript that takes the reader back to great-uncle Adam’s life, first in 1930s Berlin and then occupied Poland in the 1940s. As a young man, Adam falls in love with Anna – who promptly disappears after the Jewish pogrom of November 1938. His grandmother enlists the help of a senior officer under the new regime, and they enable Adam to assume a new identity and search for Anna in Poland. With the help of the Polish resistance, he changes places with Anna in the Warsaw ghetto, and she is smuggled out to safety.

In the brief third section, Eddy finds 90-year-old Anna alive in New York. He restores the pieces of the story to her as best he can. Moses died thinking that his brother Adam was a thief, whereas in fact their grandmother had sewn most of the family diamonds into the jacket that Adam took with him. He found them at the crucial moment in the ghetto, and bought three weeks to write his story before being put on a train east. Eddy can read Anna his great-uncle’s writing because it was saved with the help of a young girl.

Rosenfeld has a sharp eye for the comic touch. She slices into the family mishaps of Eddy and his mother with particular bravura, and supporting characters leap off the page. With its whistle-stop tour of Nazi German history and fresh engagement with Europe’s recent wartime past, Adam’s Legacy is an ambitious and thrilling novel.

Astrid Rosenfeld was born in Cologne in 1977. After finishing secondary school, Rosenfeld spent two years in California, then moved to Berlin to train as an actress. Since then she has worked in various positions in the film industry, including as a casting director. She currently lives in Berlin.

Diogenes Verlag was founded in Zurich in 1952 by Daniel Keel and Rudolf C. Bettschart. One of the leading international publishing houses, it numbers among its authors Alfred Andersch, Friedrich Dürrenmatt, Patricia Highsmith, Donna Leon, Bernhard Schlink and Patrick Süskind. Children’s authors include Tatjana Hauptmann, Ute Krause, Karl Friedrich Waechter and Tomi Ungerer. Diogenes is home to the two international bestselling authors Patrick Süskind (Perfume) and Bernhard Schlink (The Reader). Schlink’s latest publications in English are The Weekend and The Gordian Knot, both published by Weidenfeld & Nicolson.