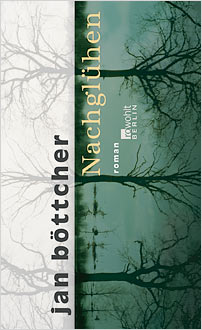 This longish novella tells the tale of Jens Lewin and Jo Brüggemann, two inhabitants of the isolated rural village of Stolpau on the Elbe. The village was a border town before the fall of the Wall, with the Elbe itself forming part of the border reinforcements, and its recent history has had a tangible impact on the community: the residents are taciturn, directly affected by their brooding environment. This general impression is strengthened by many evocative descriptions of the grey, flat and rather inhospitable landscape against which the story unfolds.

Moving between pre- and post-unification periods, the narrative traces how complex personal interrelationships within the village coincided with the particular set of difficult political circumstances in place during the GDR, and suggests that a similar mixture of personal antipathies and local politics results in a tragic replay of events for the main character, Jens Lewin, seventeen years after German unification. The trouble begins when the young teenager fools the authorities into allowing him to present an anti-GDR puppet show for the state’s thirty-sixth birthday celebrations, for which he is sent to gaol. Later he and his friend Jo Brüggermann, a dab-hand at technical inventions, cook up a plan for interfering with the communication system on the Elbe border, plugging their own radio into the network and playing a tape of a simulated orgasm, with Jens interrupting with his own conversation when one of the guards picks up the signal. But the plan misfires. Jens is left with all the incriminating equipment, and is still in prison when the Wall comes down. All this, however, is no more than the prelude to the sad, embittered post-reunification events, full of betrayals, incomprehension and hauntings from the past, that follow, for Jens and his former coconspirator especially.

This book is a welcome new take on a number of ‘old’ themes. Firstly, it shows clear resonances with the nineteenth-century German Novelle, but transposes the genre extremely well to a contemporary setting. Secondly, the way in which it interweaves the pre- and post-unification periods in an isolated former border area and intermingles complex political situations with difficult personal relationships is masterly. A strong recommendation.

Jan Böttcher was born in 1973 in Lüneburg and studied German and Scandinavian literature in Stockholm and Berlin. He has lived in Berlin snce 2003 and works as an advertising copywriter and a musician as well as a novelist. He is the frontman of the band Herr Nilsson. In 2003 he published his warmly received debut ‘Lina or The Frigid Moor’. At the Ingeborg Bachmann Competition in 2007 he won the Ernst Willner Prize for the short story on which this novel is based.