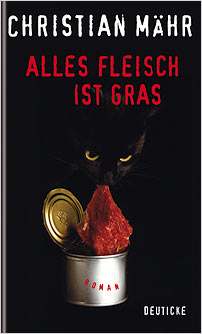 This deliciously light-hearted tale fits snugly into the crime genre and yet provides a highly original take on the murder mystery. Bursting with larger-than-life characters and an inventive plot, the novel entertains and intrigues while raising questions of justice and retribution that invite parallels with the Nazi era: Mähr explores how ordinary people’s weaknesses can be used to draw them into unholy alliances from which they later have trouble extracting themselves.

Anton Galba, the director of an innovative sewage treatment works, is having an affair with an employee. He is confronted by a colleague, and when Galba accidentally kills him he masks his guilt by disposing of the body in the plant’s bio-waste reprocessing facility. The game seems to be up when police inspector Weiss arrives, and yet he fails to arrest Galba, instead enquiring in detail about how a body could disappear into the plant. Weiss has a score to settle, soon dispatching his first victim into the sewage tank. And this is only the beginning.

Weiss decides that this seemingly flawless way of making people disappear presents a golden opportunity for meting out some good old-fashioned vigilante justice. Galba’s guilt leaves him with no option but to turn a blind eye, setting in motion a series of ‘disappearances’ of local undesirables, in the inspector’s eyes – wife-beaters and drug dealers are among the first. An investigative journalist is hired by Galba, who eventually tries to put a stop to the killings, but the journalist, too, has a score to settle, and soon has blood on his own hands. Things reach a peak, but unfortunately not the end for Galba, when he accidentally kills Weiss and the journalist, only to discover that his own wife has become the ringleader of the sewage-plant-disposals. So Galba must accept that the disappearances, and the terrible mess that he has got himself into, will not end with Weiss’s death.

Having cleverly reversed the suspense of the murder mystery by introducing the murderer at the outset, Mähr takes his readers on a playful and often surreal journey full of twists and turns to produce an engaging and witty novel.

Christian Mähr was born in 1952 and lives in the Vorarlberg region of Austria. He is a writer, beekeeper and doctor of chemistry. He has contributed scientific programmes to the Austrian radio station ORF since 1982 and has published numerous books. His previous novel Semmlers Deal was published by Deuticke Verlag in 2008.