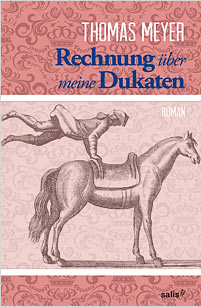 Thomas Meyer delights his readers with this witty, scurrilous account of an intriguing chapter in European history, brimful of comic episodes.

This is the story of Friedrich Wilhelm I of Prussia, of his third year on the throne, and of his fascination with very tall men. Friedrich Wilhelm inherited Prussia, along with a massive national debt, from his spendthrift father in 1713. As a result of his father’s extraordinary wastefulness, the young king is compulsively frugal and begins his reign by selling off palaces and other royal assets. Contemptuous of culture and the arts, which he deems unfit for proper Prussian men, he is intent on building an army to bring the troublesome French to their knees.

Yet contrary to this picture of a sober young monarch, Meyer’s depiction of Friedrich Wilhelm is that of a true eccentric. The king’s pleasures and whims are cruel and arbitrary, directed both at his long-suffering subjects and the wellborn men of his court. Thus he makes the Jews in Berlin wear foolish red hats for no apparent reason and he humiliates his toadying court historian daily by making him the butt of elaborate and dangerous jokes. But chief among Friedrich Wilhelm’s eccentricities is his love of giants. He is willing to pay any amount of money to acquire them, to the point of ruining his kingdom. His most fervent dream is to create a regiment consisting only of tall men, his own personal battalion of titans, and to that end he recruits unusually tall men from every corner of the known world. The recruitment process is by no means voluntary, however. The king’s secret agents comb the countryside, press-ganging all suitable candidates into service. The kidnappings are so common that tall men have taken to hiding or fleeing central Europe altogether. The book begins with just such a kidnapping – that of Gerlach, a tall young man from Saxony. But Gerlach’s arrival at the royal court sets in motion a series of events that spell the beginning of the end for Friedrich Wilhelm’s army of giants.

Meyer’s style is light and funny without being trivial. The tone of the book is light-hearted and uproarious, but never loses sight of what is, at its core, a dark subject matter. The historical setting is beautifully rendered and full of colourful details. Above all, Meyer has an eye for what is funny and fantastical, and All my Ducats is a cavalcade of both.

Thomas Meyer was born in 1974 in Zurich, and eventually dropped out of law school to work as a writer for advertisement agencies and as a journalist. After publishing a series of online columns, he went into business for himself as an author. His first novel Wolkenbruchs wunderliche Reise in die Arme einer Schickse saw great success in Switzerland and is currently being turned into a film. Thomas Meyer lives and studies in Zurich. www.herrmeyer.ch

Salis Verlag is an independent publisher of highquality literary fiction, crime novels, and non-fiction, with a focus on young (and young-at-heart) authors. Salis Verlag has been publishing since 2007, and brings out eight titles a year, with an emphasis on high-quality content and design.