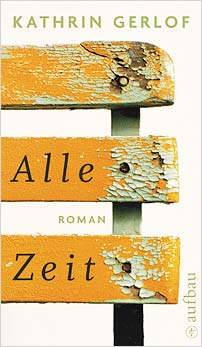 Facing the demons of ‘the second novel’ head-on, Kathrin Gerlof has created an assured, controlled work that is at once a compelling family saga and a tender, non-saccharine exploration of growing old and the passion that can still flower. A meditation on love and its absence, sex and its consequences, loneliness in both the young and the old, together with the importance of trust, the story is told in the present tense, with all the immediacy that can produce, set against a backdrop of post-war German uncertainties and spanning the period between that time and the present day.

The story of five women, this novel begins with a brief winter encounter on a park bench between Juli, a pregnant seventeen-year-old with green hair, and a confused old woman, who confesses there are words and memories she cannot hold on to. There is a tug of human recognition, a warmth between the women; Juli, too, knows loneliness in the aftermath of the accident that has killed both her mother and grandmother. The narrative weaves back and forth, now into the immediate post-war period where a young woman called Klara tramps four kilometres to a Russian airbase where she sleeps with an officer in exchange for bread and potatoes to feed her young child, Henriette, in the absence of her soldier husband. Taunted by the locals as ‘the Russians’ tart’, she is given a job as a Communist functionary. When her husband returns from Soviet imprisonment, family life takes on a normality of sorts, but the little girl’s loneliness leaves scars. The reader follows an older Henriette, now a mother herself – daughter Elisa wishes she would open up about her past and the grandmother she has never seen.

Back in the present day, the old woman has found a suitor in the care-home, an elderly man of Jewish descent. He addresses her by name and we discover she is ‘Klara’. Henriette and Elisa’s story concludes as they walk back from their visit to an old family cottage in severe weather conditions and are run over by a lorry. There is, however, promise of the family circle closing, when Juli – greatgranddaughter to Klara? – goes in search of the old lady she once met on the wintry park bench.

Recounted with delicacy and gentle humour, Kathrin Gerlof’s novel proves she is no ‘one-book wonder’.

Kathrin Gerlof was born in 1962 and now lives in Berlin. She studied journalism and worked as an editor for a variety of newspapers. She is now a freelance journalist, film-maker and author. Her debut novel Teuermanns Schweigen was published in 2008 and was acclaimed by buchkultur.de for the addictive quality of its ideas.