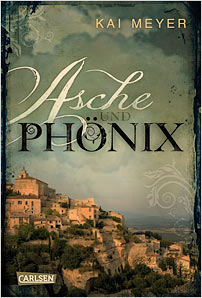 Parker Cale is a world-famous movie star following his lead role in the Twilight-esque series ‘The Glamour’. But he has come to loathe the obsessive adoration of teenage girls, who only see him as his screen persona, Phoenix. Parker grows tired of being controlled by his father, who is also the films’ producer, and publicly dissociates himself from him. After striking up an unlikely friendship with a girl called Ash, whom he catches trying to steal his money, they embark together on an extraordinary journey into his family’s past. They discover that Parker’s father made a Faustian pact with the demon Libatique who promised him immense fame. Parker’s own life forms part of the bargain and his split with his father provokes Libatique to seek revenge. We follow Ash and Parker as they search for a way to destroy Libatique, and fall in love along the way.

Ash and Phoenix, the latest book by internationally bestselling author Kai Meyer, is a fast-paced thriller and an urban fantasy novel rolled into one. The real-world settings range between London, California and the south of France, while the book’s supernatural elements provide out-of-this-world suspense.

Kai Meyer was born in 1969 and studied film and theatre. He worked as a journalist before becoming a full-time writer in 1995. He has written numerous bestsellers and is a widely read fantasy author in Germany.

Carlsen Verlag was founded in 1953 as a subsidiary of the Danish company Carlsen, Copenhagen, so that its series for younger children could be published in German translation. Carlsen Verlag Hamburg has been publishing its own titles since 1964, ranging from picture books for younger children to novels for young adults. Educational series include both fiction and non-fiction for kindergarten and primary school levels. Carlsen Comics was the first to introduce comic books to the German market.