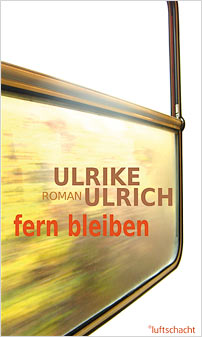 Away is a striking literary debut and an original approach to what is both a love story and in a sense a ‘family novel’. Reminiscent of Ali Smith, or early Janice Galloway and A L Kennedy, the author has a great eye for detail, a lovely sense of humour, a wonderfully light touch, and even a poetic streak. Very much set in the twenty-first century, Ulrich’s novel is the perfect read for a long journey.

Lo, a thirty-something from Dortmund who works with computers, wins a TV competition with her mother and takes off – by train – for Italy, while her mother travels to America. Lo leaves behind her job, family, lovers – and ends up travelling round Europe as the mood takes her, sleeping on trains, never in hotels, and showering in stations. The novel might be summarised in terms of the places she visits: Munich Rome Berlin Paris Madrid Vienna Basel Zurich Milan Naples Prague Vienna former Yugoslavia Thessaloniki – the last for ten minutes. But it is also about the people she meets: fleeting contacts, mostly. Some – such as Julia, the editor of VIA, the in-train magazine in Switzerland, she will meet again. With one, David in Vienna, she begins to fall in love – this being the focus of the final third of the book, though Lo continues to travel. In the final chapter, she buys a new Inter Rail ticket; prepares to travel to Scandinavia and from there to the Baltic states – but SMS contact with David would suggest a stronger connection.

Away is about travelling without a precise goal; about never arriving, only ever passing through; about not wanting to commit to anybody or anything; about taking decisions only as far as the next ‘station’; about the avoidance of repetition; about the ability to be alone. Written in the third person and the present tense, the narrative’s sense of immediacy and ease are compelling. The chapter headings normally consist of a train number – and the name of the station from which Lo’s latest train departs. Ulrich’s handling of the material is always charming, never dull.

Both accessible and enjoyable, this novel with its thirtysomething cast will appeal to younger readers, though the quality of the writing will satisfy older readers, too. It will delight both male and female readers. Trainspotters, though, will be disappointed.

Ulrike Ulrich was born in Düsseldorf in 1968. She has been living in Zurich since 2004 and is the editor of an anthology of literary texts published to mark the sixtieth anniversary of the Universal Declaration of Human Rights. She has won numerous awards for her writing, most recently the annual scholarship of the Lydia Eymann Foundation (2010–11). Fern bleiben is her first novel. See www.ulrikeulrich.ch. Ulrich is in the Zurich Literature Group index: www.wortundwirkung.ch.