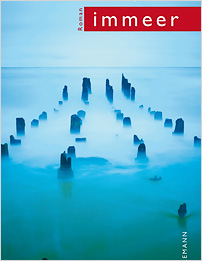 Henriette Vásárhelyi’s keenly anticipated debut novel opens on a summertime beach on the Baltic coast, with an exuberant play-fight in the sand between two men and a young woman, all of them carefree and innocent. The novel ends having come full circle on another beach – this time, on the Italian island of Elba, where the woman is now alone and silenced by grief. In between, Vásárhelyi tells the story of the twenty-something Eva Blach and her terminally ill friend Jan Strübing.

Eva shares an apartment in Berlin with Jan and their mutual friend Heiner. The three are an inseparable team from a provincial Baltic town who have moved to the capital to satisfy their insatiable appetite for life with no thought for the future. However, we learn that Jan never had a future, having been diagnosed with an aggressive form of brain cancer as a teenager. As Jan’s health deteriorates, their three-way relationship becomes troubled. Heiner and Eva fall out for good after she maliciously reports him to the police for drug possession and their flat is raided. Heiner subsequently moves out and Eva loses a friend and ally. She then cares for Jan, witnessing his rapid decline in health in all its gory detail. He becomes aggressive, adopts strange habits, loses control of his bodily functions and is finally transferred to a hospice, awaiting a premature death.

In the weeks and months after Jan’s funeral Eva describes how she goes about her everyday activities and how even the simplest action is burdened with memories and meaning. The only interruption in her withdrawn post-Jan life arises as a result of a coincidence. When Eva begins a relationship with an old acquaintance of Heiner’s he takes her on holiday to Elba, convinced that this milder and altogether friendlier place will help to cure her of her melancholy. But Eva is clearly not ready to leave Jan behind.

This slim novel manages to feel both floatingly effortless and intense at the same time. It is beautifully written, its language crystal clear and poetic, with moments of youthful irreverence, quoting song lyrics and poetry with nonchalance. For a text that deals with something as intangible as grief and loss, it has a very real presence and is populated with objects, events and physical sensations. Its structure is masterful, ebbing and flowing as the narrator’s present experiences give way to her memories. Beyond the Horizon is an ambitious and subtle prose work to be savoured.

Henriette Vàsàrhelyi was born in 1977 in East Berlin and grew up in Mecklenburg. She finished her training as a Management Assistant of IT-Systems and studied at the German Literary Institute in Leipzig. She is currently studying to finish her MA in Contemporary Arts Practice at the University of the Arts in Bern. She lives with her family in Biel.

Dörlemann is a Swiss publishing house, based in Zurich. Founded in 2003, it publishes a mix of fiction and non-fiction from both new and established writers. Authors include Sandra Hughes, Jens Steiner (longlisted for the German Book Prize in 2011) and Jolanda Piniel, nominated for the best independent book of 2012 published in German.