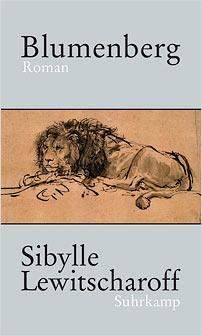 Not a word is wasted by Lewitscharoff in this superbly written novel where everything is significant. Themes and style alike contribute to the overall effect: a clever blend of poetry, philosophy and comedy by an author who is a master of her craft.

The novel centres on a fictionalised version of the German philosopher Hans Blumenberg, most famous for his concept of ‘metaphorology’, who died in 1996. Suhrkamp has recently reissued Löwen, a volume of notes on ancient and modern stories about lions taken from Blumenberg’s unpublished papers, and Lewitscharoff’s narrative gives the philosopher an actual lion, which turns up in his study one evening in 1982, and becomes his silent companion for the rest of his life. The lion is an ontological puzzle: is he real, tangible, or simply a lengthy hallucination? When Blumenberg’s wife eventually finds him dead in 1996, there is a smell of lions in the room, and a few yellow hairs cling to his clothes.

Running parallel to the philosopher’s narrative are those of a handful of his students in the year the lion appears. Isa is in love with Blumenberg, though he doesn’t know it, and in despair she throws herself off a motorway bridge. Richard imagines Blumenberg reading his dissertation, and is so crippled by the professor’s imagined disdain that he cannot complete it. He travels to South America, where he is brutally murdered in an alleyway. Hansi, an oddball who torments his fellow students and the general public by relentlessly reading poems at them in bars and restaurants, becomes even more eccentric after leaving university, and eventually drops dead whilst being arrested for creating a public nuisance with his aggressive philosophising. Only Gerhard, a dedicated ‘Blumenbergian’, manages an academic career, and even he turns up in the book’s final chapter, set in a kind of waiting room in the afterlife, where Blumenberg and his lion are reunited with his dead students.

Interesting stylistic twists make Blumenberg difficult to pigeonhole. The lion takes the narrative into the territory of magic realism, and the final chapter in the afterlife goes beyond this. There are also interventions from the narrator, who, for example, having told us what is going through Isa’s mind in the seconds before her death, muses on whether it’s actually possible for a narrator to know this, and how much of it is plausible. A highly original work.

Sibylle Lewitscharoff was born in Stuttgart in 1954 and now lives in Berlin. She has received numerous awards for her writings, including the Ingeborg Bachmann Prize and the Marie Luise Kaschnitz Prize. Her recent novel Apostoloff earned her the prize of the Leipzig Book Fair, and is forthcoming in English with Seagull Books.