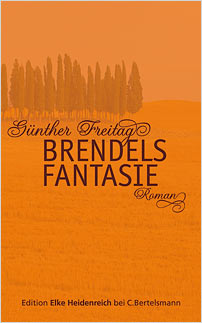 Höller, a successful manufacturer and Schubert enthusiast in his fifties, has been diagnosed with a terminal brain tumour, leaving him eighteen months to live. Without telling his wife and family of the diagnosis he resolves to sell his business to the Russians and use the proceeds to fulfil his dream of creating the perfect conditions for Alfred Brendel to record the definitive performance of Schubert’s ‘Wanderer Fantasy’. He writes to Brendl with his suggestion and goes on holiday to Italy, ostensibly to recover from exhaustion, but in reality to find the perfect venue for the recording. He settles on the small Tuscan town of Castelnuovo and starts to make detailed plans for the project but without divulging his true intentions to anybody in the area.

He encounters a succession of stumbling-blocks, mainly in the form of a motley collection of bizarre and grotesque characters, providing the novel with a rich vein of black comedy, but such is Höller’s obsession that he is wilfully blind to the resentment and resistance quietly developing among the locals, and he finds ingenious ways of circumventing the hindrances, convinced he will be tolerated as an eccentric foreigner. Feeling abandoned and misunderstood by his successful barrister wife and two adult children, who believe that the sale of the business and the ‘Brendel project’ are merely a mid-life, irresponsible whim, and with no response forthcoming from Brendel, he presses on regardless.

His stout Italian landlady, his world-weary fellow boarder the Professor, the drunken priest Don Cesare, the crew of goatish old men from the retirement home whom Höller confidently expects to transform into attendants for his concert hall, the dwarf Gesualdo who is the mayor’s righthand man, and the mysterious boy with his offers of help people the pages. The story gathers pace to its startling climatic chords, which meld the likely and predictable with the outlandish and unexpected, and there is a poignancy in the madcap scheme and expression of a man wresting back control from his malignant fate.

An interplay of light and dark, comic and tragic, a gleeful skewering of modern manners, preoccupations and lifestyles, surreal flights of narrative are interspersed with moments of emotional insight, lyrical description and scabrous comedy. A brilliant depiction of the human capacity for delusion in a spellbinding read. Will Herr Brendel agree?

Günther Freitag was born in 1952 in Feldkirch/ Vorarlberg, and studied German and history in Graz, while continuing his piano studies at the conservatory. He has won a number of prizes for his literary works, including the Steiermark Scholarship in 1990 and the town of Leoben’s Culture Prize in 1992.

Edition Elke Heidenreich was founded in 2009 as an imprint within the C. Bertelsmann group, taking its name from the well-known television and literary critic. It publishes both literary fiction and non-fiction books dealing exclusively with music and aims to represent – in Elke Heidenreich’s own words – ‘a pleasure in literature, a pleasure in music and the delight of joining the two.’ Its authors include Hans Neuenfels, Franz Werfel, Barbara Hall and Angel Wagenstein.