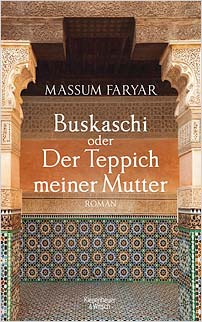 Buzkashi paints a fascinating picture of life in twentiethcentury Afghanistan through its detailed portrait of two generations of one family. The novel’s title is derived from a scene in which a son living in Germany returns to Afghanistan after many years to visit his mother. She is suffering from dementia and stares at the rich carpet on the floor of her bedroom, an engagement gift from her husband. The pattern on the carpet depicts a buzkashi game, the national sport of Afghanistan in which a pack of riders battle at high speed over a dead goat: the winner is the one who can keep hold of the goat carcass for long enough to ride it through the goal. The buzkashi motif serves to illuminate both the politics at play in this particular family and the global history of Afghanistan.

The two central characters whose past and present are interwoven are the narrator, Sha’ir, and his father. The story begins with a formative event from the narrator’s childhood in which he encounters the naked wife of a neighbour in the hamam. Banned from returning to this paradise by his mother, his father sweetens the transition to the men’s hamam with the promise that for each visit he will narrate an episode from the story of his own rise from simple farmer’s son to influential trader and respected imam, responsible for delivering the Friday sermon in the local mosque.

Faryar creates richly-sketched tableaux of multicultural Afghan society, populated by a myriad of fascinating characters that include members of Afghanistan’s Jewish and Hindu minorities. The novel has a number of strong female characters, such as Sha’ir’s sister who marches with the Maoists, becomes a gynaecologist and tortures and shoots the Sultan for killing one of her brothers. Faryar employs an array of characters on the fringes of history as well as encounters with key historical figures to conduct a subtle exploration of ethnic, religious and political rivalries. The narrative is interspersed with short fairytales and fables that often carry warnings for the characters and serve to heighten Buzkashi’s pleasurable, easy-reading style.

Buzkashi will appeal to readers of Khaled Hosseini’s bestseller The Kite-Runner as well as Atiq Rahimi’s A Thousand Rooms of Dream and Fear. While sharing their potential to succeed as a film, Buzkashi stands out both for its sweeping historical scope and its affectionately delineated characters.

Massum Faryar was born in Afghanistan and moved to Germany in the 1980s. He studied German and political science in Munich and completed a doctorate in these subjects at the Free University of Berlin. He was awarded the Alfred Döblin Fellowship for his work on Buzkashi. This is his first novel.