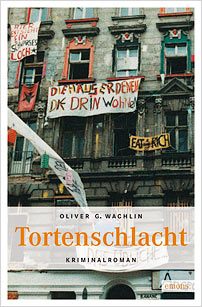 Once arrested for attempting to flee the former East Germany and now living in the western half of Berlin, Wachlin draws on personal experience of both sides of the Iron Curtain in this thrilling crime novel. Set in Berlin ‘between two states’ – just after the GDR officially ceased to exist but before it became part of the new Germany in 1990 – Cake Fight is the second novel featuring chief inspector Hans Dieter Knoop.

West Berlin police superintendents Knoop and Hünerbein are sent to assist in a case in East Berlin, with a brief to support and train former East Berlin police officers on the job. Their starting point is the dead body of a punk, lying in the ruins of a burned-down house. Knoop’s own daughter Melanie seems to be involved with the East Berlin alternative scene of punks and squatters; however, she seems to be connected to another death – apparently a case of suicide. Confusion reigns when yet another dead body, this time a West German politician, is discovered. Former members of the East German secret police seem to be caught up in the crimes, and in the end all the leads point to one man. Siggi is a real-estate speculator and ex-husband of Knoop’s ex-girlfriend Monika. His large-scale acquisitions of East German buildings turn out to be one huge laundering of Stasi money.

Cake Fight involves everything a good crime novel should: murder, corruption, drugs, romance and a tough copper who can’t be fooled. Turbulent times in German history are masterfully reflected in a turbulent story. One of Wachlin’s great strengths is to show the huge differences between the two Germanys and the great challenges inherent in achieving their successful integration. At the official unification ceremony, the East German Volkspolizei is integrated into one united German police. The military band performs both national anthems and the policemen exchange uniforms. A former GDR chief inspector is feeling disorientated, not knowing where he now belongs: his feelings and thoughts speak for many citizens at that time.

The switching narrative perspectives give a very strong impression of the chaotic times in which the book is set. With his description of the different characters of East and West Berlin, Wachlin convincingly depicts a watershed period of transition in which many were hoping for better times, while others were just trying to gain some advantage.

Oliver G. Wachlin, born in 1966, is a screenwriter who knows both sides of the former divided Berlin very well. In one part, he was arrested for trying to flee, and he now lives with his family in the other. That part of western Berlin was also the location of his first crime novel, Wunderland, a detective story set against the backdrop of the fall of the Berlin wall.

Emons Verlag was founded in 1984 by Hermann-Josef Emons in Cologne. Today the company is market leader in the Regional Mystery sector, with forty different series. Besides mystery stories, the publisher’s list has always included other titles with a regional background, such as historical suspense novels, guide books, atlases, illustrated books and non-fiction books concerning culture, history and the documentation of National Socialism. In 1995 Emons published Frank Schätzing’s Novel Death and the Devil, which has become an international bestseller.