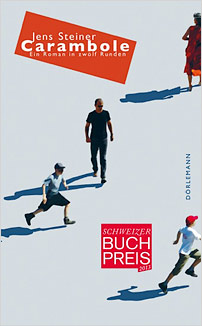 Carom is an enthralling collection of twelve vignettes that are interwoven to give us a picture of an unnamed Swiss village during a few weeks one summer. This highly original book has already wowed German-language audiences, winning the 2013 Swiss Book Prize and appearing on the longlist for the 2013 German Book Prize.

There are two key constellations of characters involving trios of friends: three schoolboys on the verge of puberty, and three elderly men who meet up regularly to play the carom billiards game of the title. The boys’ repeated complaint – in common with several of the other protagonists – is that nothing ever happens. In fact, plenty of things happen in the course of the novel: a wife leaves her family, chemical tanks explode, the village’s star resident is rumoured to have disappeared, a girl is raped and a man dies. But the plot is driven by other concerns, focusing on the way in which many inhabitants of the village seem to have become mired in lethargy, while under the surface, their frustrations reach breaking point.

Frustration takes many forms in the novel. A mother is frustrated because she no longer understands her daughter and her husband; two estranged brothers continue the unfulfilled life they have lived for years, watched by the paralysed motorist who caused their parents’ deaths; a father mourns the loss of his wife and son amidst the ruins of his business. But there are small moments of affirmation and action that propel the storyline forwards, in particular the friendship between the three men and their discussions of philosophy and reconciliation. At the close of the novel, the younger protagonists are growing up while the older generation are moving towards an understanding of the processes that have brought them to where they are.

This is a carefully layered and elegantly written novel. The minimalist prose style and apparently simple language mask a rich array of cultural references, ranging from antique philosophy to Marxist theory. Steiner’s chapters bear the names of moves in a game (‘First moves’, ‘Predicament’, ‘Breakthrough’, ‘Stalemate’, ‘Your Turn’), drawing attention to the arbitrary and unforeseeable outcomes of human interactions. The different narrators intersperse their accounts of daily life with recollections from the past and personal reflection to illuminate the smallest details in unexpected ways.

Jens Steiner was born in 1975. He studied German literature and linguistics, philosophy and comparative literature in Zurich and Geneva. His debut novel A Hare’s Life was longlisted for the German Book Prize 2011. In 2012, he received the award for the most promising young writer from the Swiss Schiller-Foundation. In the same year, Carambole, his second novel, was awarded the Marianne and Curt- Dienemann-Foundation Prize. Jens Steiner lives in Zurich.

Dörlemann Verlag AG is a Swiss publishing house, based in Zurich. Founded in 2003, it publishes a mix of fiction and non-fiction from both new and established writers. Authors include Sandra Hughes, Jens Steiner (longlisted for the German Book Prize in 2011) and Jolanda Piniel, nominated for the best independent book of 2012 published in German.