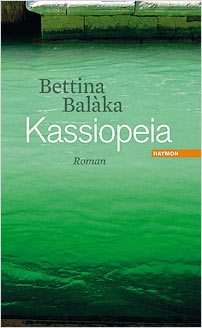 Cassiopeia is a novel which gets under one’s skin. Its tragicomic story is narrated in lively sharp-tongued prose, laced with ironic humour.

‘Cassiopeia’ is the name of a constellation of stars, the title of a best-selling novel that launches the career of Austrian author Marcus Bachgraben, and the third favourite word of Balàka’s protagonist, Judith Kalman. Marcus and Judith have a one-night stand after meeting at one of Marcus’ readings, and Judith is certain that they are meant for each other. So when Marcus goes to Venice for a six-week writers’ residency, Judith follows him there, and the city of romance becomes the stage for Judith’s increasingly obsessive antics.

Accustomed to getting her own way, Judith has decided that Marcus is the key to renewed happiness after her husband’s suicide some years previously. Judith stalks Marcus, singlemindedly amassing details of his personal life and movements. Her efforts to ensnare him make Fatal Attraction seem tame. A surprise visit from her larger than life, poodleowning best friend generates further amusing encounters, in which Balàka sets up hilarious contrasts between the characters’ thoughts and the words spoken out loud.

Much of the action takes place in a beautifully described Venetian home, a treasure trove belonging to an antique-dealer friend of Judith’s. Flashbacks to the main characters’ family histories enrich the narrative with marvellous and grotesque detail. There is the fairy-tale betrothal of Judith’s parents, Judith’s spiteful tom-cat who is fond of urinating in her deceased husband’s clothes and shoes, and the cruel conditions in which Marcus’ mother keeps her hens, a far cry from the organic, wholesome image she portrays at the weekly market. As in a Shakespearean comedy, the whole cast of characters are brought together at the end for a dramatic showdown. Startling revelations and the realisation that each character has been engaging in their own game-playing lead to a jolly romp of an ending with smiles all round.

Bettina Balàka is establishing a reputation at the forefront of contemporary Austrian literature. The originality of Cassiopeia consolidates her literary achievements to date. Its sardonic tone and ability to let initially unlovable characters nonetheless endear themselves to the reader are especially diverting.

Bettina Balàka was born in Salzburg in 1966, and currently lives in Vienna as a freelance writer. She has written numerous books, plays and radio plays and has received many awards for her work, including the Theodor Körner Price (2004), the Salzburg Award for Poetry (2006) and the Friedrich Schiedel Literature Prize (2008).

Haymon Verlag was established in 1982 by the historian, journalist and author Michael Forcher as a non-fiction publishing company. The Haymon Verlag is named after the ‘Giant Haymon’ who, according to an old legend, founded the Stift Wilten monastery near Innsbruck in the eighth century. It was one of the first cultural centres in the region that later became known as the Tyrol. Since 1988, Haymon Verlag has primarily published German-language and international literature. It has been a subsidiary company of the Studienverlag since September 2004.