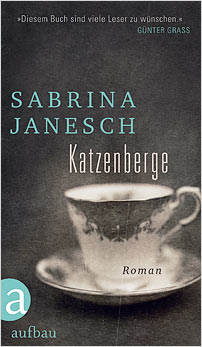 Cat Hills is an impressive debut from a promising young writer: the storytelling is self-assured, the main characters clearly cut, the sense of place strong. And Janesch succeeds in weaving together within the novel’s framework two narratives to create a work with elements of a thriller, time travel and biography.

Nele Leibert, half-Polish, half-German, returns to her family in Silesia for her grandfather’s funeral. Encouraged to go further east, to Ukraine, she becomes intrigued by mysterious comments in the village and tension surrounding her family history. Her story is interwoven with that of her grandfather, Stanislaw Janeczko, her journey east juxtaposed with his own journey west, at the end of the Second World War. ‘Djadjo’ never went back; but Nele traces his life backwards, pushing her own forwards at the same time.

History is seen through a very human lens, and mixed with superstition. Stanislaw finds a dead man in a house abandoned as Germans fled east, which he nonetheless makes his home. But it is threatened by dark forces. With his wife, he resolutely carries out the first two stages of an exorcism, of which Nele completes the final stage.

And gradually she confronts and unravels an extraordinary family history against the backdrop of waves of immigration. In Ukraine, she finds out that her grandfather is held responsible for the disappearance of his brother. His parents severed all ties, believing him to be a murderer, and the suspicion hangs heavily on Nele’s mind. But when she finally reaches her grandfather’s birthplace in Ukraine, a chance encounter with an old lady exculpates him. Admired by no less a figure than Günter Grass, Janesch’s confidently crafted novel lives up to its publicity. Hairs will stand up on the back of your neck when it’s revealed that Leszek had been alive and well in Ukraine, not murdered by his brother, and the narrator realizes that she could have reunited a family if the journey had been made earlier.

The parallel tales of past and present give an immediacy to historical events that many readers may only have been vaguely aware of in broad terms. The plight of ethnic German refugees after the last war still makes front-page news in national newspapers in Germany and this highly readable page-turner of a novel will bring this important subject dramatically and poignantly to life for an international audience.

Sabrina Janesch was born in 1985 and has studied creative writing and cultural journalism in Hildesheim, as well as Polish language and literature in Krakow. She has won several literature prizes, including the O-Ton Literature Competition of the NDR, as well as scholarships to the Stuttgart Writers’ House and the Literary Colloquium in Berlin. She garnered much media attention as the first writer in residence in Danzig, Günter Grass’s city of birth. Janesch is currently working on her second novel.