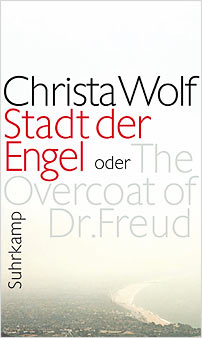 In her first substantial new prose work for several years, Wolf explores immigration from Germany to America and the nature of capitalism. Her great strength lies not in poetic description and phrasing but in discursive reflection and the immediacy of her self-questioning narrative voice. Like many of her previous works, City of Angels functions clearly as autobiography and is preoccupied with the unreliability of memory, the process of forgetting, and the difficulty of reconstructing the past from the traces it leaves behind. The chief fascination for the reader will lie in what it reveals about Wolf herself and her experience of historical periods, particularly that of East Germany.

Wolf draws on the time she spent in the US in the early 1990s. The author/narrator is officially in Los Angeles to research the story of a German immigrant known simply as L., who corresponded with a friend of hers; but it emerges that Wolf was also escaping from Germany after having read her Stasi files, which turned up a forgotten act of collaboration with the Stasi. That scandal breaks while she is in the US, with disastrous consequences for the writer’s mental health. Towards the end of the text, as L. begins to recover her composure and visits other parts of the States, from Native American reservations to Las Vegas, the author is accompanied by ‘Angelina’, a black angel who is also the apparition of a cleaner in her hotel, in an understated nonrealist touch.

The most striking elements of the novel are the narrator’s own memories, reaching back to the end of the Second World War, the beginnings of East Germany, 17 June 1953, and the expatriation of the poet and musician Wolf Biermann; and of course there is much reflection on German reunification (what is the correct translation of Aufstand? she repeatedly asks), often prompted by questions from Americans the narrator meets. These memories are slowly woven into narrative like a tapestry or mosaic, giving little gems of insight.

Wolf is a towering figure in contemporary literature and City of Angels is further evidence of her importance – for its reflections on German emigration, its consideration of the early 1990s not as ironic period setting but as political history, and because it adds further to our understanding of one of the most significant surviving figures from East Germany within her own context.

Christa Wolf is one of Germany’s best known and most important living writers. She was born in Landsberg, Warthe (Gorzów Wielkopolski) in 1929 and now lives in Berlin and in Woserin, North East Germany. She has been the recipient of numerous prizes, most recently the Thomas Mann Literary Award 2010 and the Uwe Johnson Literary Award 2010.

Previous works (including dates):
Christa Wolf’s works have been translated into more than thirty languages and include: