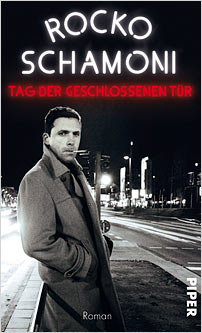 Closed for Business is a quirkily original novel that successfully combines genuine literary technique with a tongue-in-cheek critique of the world we live in today.

Schamoni’s anti-hero Michael Sonntag is an unconventional character who defies society’s expectations by refusing to invest his energy in building a career. He is out of fulltime work, having never been able to keep a position for very long as a result of his preferred hobby of deliberately catching illnesses in hospital waiting rooms. He pays his rent by writing a regular column for a newspaper, and is occasionally pulled from his lethargy by a friend’s crazy money-making ideas, although these never come off.

More than anything, Sonntag likes doing it his own way rather than conforming or fitting in. He ‘tries on’ different persona, for instance attending the annual bikers’ festival dressed up in full biker gear, or donning a suit to pose as a banker at an expensive after-work club in the financial district. In his ample spare time Sonntag writes deliberately clichéd and soppy popular novels, and sends them off to publishing companies, fully anticipating their rejection. Indeed, he joyfully collects the rejection letters in an album.

Sonntag’s determined avoidance of convention is borne of his animosity towards much of society. Despite their often flippant tone, Sonntag’s observations and actions lay bare many of the absurdities of modern society – for instance, thoughtless planning that results in cities with no soul, or the lack of thought of what to do with an ageing population. At other times, the protagonist openly voices his discontent with his environment. Although Sonntag is a self-proclaimed outsider, and for the most part enjoys his unconventional lifestyle, there is also a more tragic side to his character. Low in self-esteem, he admits he is lonely and even puts an advertisement in the newspaper to find a ‘best friend’. His love life is also unsuccessful. However, Sonntag’s luck does eventually turn around. One of his book proposals is accepted, and a former lodger leaves him a large sum of money from a bank robbery.

Schamoni is a master of word play; his style is both colloquial and eloquent; and Closed for Business is also very funny, both in terms of language and situation, sometimes bordering on the absurd. This nuanced portrait of a man struggling to find his place in the world will strike a chord with many readers.

Rocko Schamoni was born in 1966 in Schleswig-Holstein and now works in theatre, film and television. He tours Germany on a regular basis, and his many roles – including musician, writer, comedian and actor – have won him a dedicated fan base. His debut novel Risiko des Ruhms was followed by the bestseller Dorfpunks, which was adapted for the theatre and released as a film in the spring of 2009. Read more about the author at www.rockoschamoni.de.

Piper Verlag was founded by Reinhard Piper in 1904. The firm published many leading contemporary authors, a tradition followed by his son and his grandson. After 1945 the programme expanded to include philosophy and non-fiction. Piper Verlag is well known for its lists in German and international fiction and non-fiction. Authors published by Piper include Ingeborg Bachmann, Markus Heitz and Ferdinand von Schirach. Piper Verlag has been part of the Swedish Bonnier Group since 1995. In 1996 the Piper publishing group acquired the imprint Malik Verlag (literary travel writing, adventure, mountaineering), and since 2002 Piper’s list has been further enriched by the addition of high quality fantasy literature. Piper acquired the imprints Pendo (commercial fiction and non-fiction) in 2008.