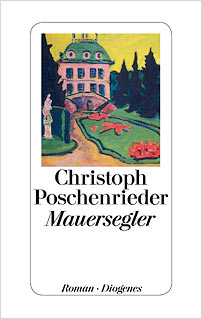 Common Swift is a highly original work of literary fiction about one man who, over the course of his life, directly and indirectly kills his five best friends. This thought-provoking novel tackles serious issues with a light touch.

Five old friends decide that they want to spend their retirement living together. They buy a beautiful house on a lake and settle in, spending their days playing with model train sets, gardening and reading, while their evenings are full of long meals, good wine and cigars. Every year they have a memorial drink for the sixth member of their group, Martin, who died when he fell through the ice of their local pond as a child. The five men want to take control of their own eventual passing and one of them creates a computer program called ‘Angel of Death’, which allows everyone to choose who will be responsible for releasing him from life, when the time comes. No one else needs to know whom the others have chosen. When the program is activated, the chosen friend will receive a text message informing him that he is the Angel of Death and must help end the other’s life.

The first one to go is Wilhelm. His health gradually deteriorates and eventually he signals that he’d like it all to be over. Karl (the first-person narrator) is the chosen one. He feeds Wilhelm some poison, but it is not enough to do anything more than put him into a very deep sleep. Karl reacts to this by suffocating Wilhelm with a pillow. Then Heinrich, who has advanced dementia, wants to end his life and Karl is once again chosen. This time Karl gives Heinrich the tiniest push off a high ledge in their garage and he falls to his death. He stops Ernst’s heart using electric wires and breaks Siegfried’s neck after he falls on the stairs. We gradually learn, almost in passing, that he was also in some way responsible for Martin’s death decades earlier, because he insisted that the ice was hard enough for his friend to walk on.

Common Swift is a universal novel which is sure to travel well. It is reminiscent of the novels of Ian McEwan in its literary treatment of a contemporary predicament, where moral considerations are combined with a healthy dose of black humour.

Christoph Poschenrieder was born near Boston in 1964 and studied philosophy in Munich. He also attended the Journalism School of Columbia University, New York. He has worked as a freelance journalist and documentary filmmaker although he now focuses on literary writing. His debut, Die Welt ist im Kopf (‘The World in the Head’), received rave reviews and international attention. Christoph Poschenrieder lives with his wife in Munich. His books have been published in five languages.