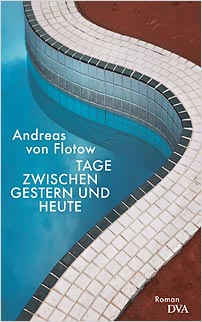 The nameless narrator of Andreas von Flotow’s stylish first novel begins with a stark summary of the facts: in 2005, both of his parents were shot. His father died instantly, while his mother fell into a coma, remaining there until her death five years later. The perpetrator? The narrator’s uncle, a half-brother of his mother.

Writing some two decades later, the narrator is attempting to piece together memories from his fractured childhood, creating order out of the chaos of the double tragedy. The novel recounts events over a period of ten years, beginning five years before the attack and ending with the death of the narrator’s mother, a famous American singer. Each chapter deals with different memories: a summer in France; an evening on tour; the day of the attack itself. With the help of these snapshots, an intriguing picture of the narrator’s troubled childhood begins to emerge.

Days Between Yesterday And Today embodies the narrator’s curiosity about memory. How does it work? Is it reliable? And can its processes be adequately framed in words? Moreover, if both memory and language prove to be insufficient to his task of reconstructing the past, how can he ever hope to come to terms with what he has lived through?

Andreas von Flotow was born in 1981 and first worked as a dramaturgy assistant in theatres including the Maxim Gorki Theatre in Berlin and Hamburg Theatre. At present he is freelancing as a dramatic advisor in Berlin, Basel, and Vienna. Days Between Yesterday And Today is his debut novel.