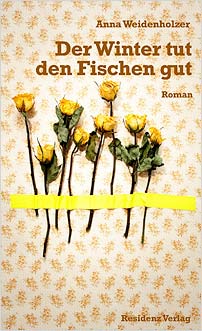 Winter is Good for Fish is a wholly unsentimental novel about loneliness, unfulfilled dreams and the sense of being overwhelmed by life. Its unique tone – crystal clear and yet somewhat distanced – provides an exquisite perspective through which to explore these themes, laying bear the central character’s vulnerability.

Maria would have liked to be a singer. If Eduard had only come back as he had promised he would. Instead when he came back it was with a girl from the town, and the girl was pregnant. Maria stopped dreaming and trained to be a haberdasher. She learned about fabrics and colours and dressmaking patterns. She paid attention to her appearance – a slim figure and manicured hands were essential for her profession – and married Walter, a car mechanic and Elvisimpersonator. She moved in with him to her parents-in-laws’ house on the other side of the village until they could afford to rent an apartment in town.

The novel opens as Maria is waiting to see a counsellor: she reflects that she has achieved her modest goals but has not had sufficient faith in herself. The narrative then proceeds in reverse from Chapter 54, as the apparently middle-aged Maria gets up one morning, until Chapter 1, in which we see the child Maria in the kitchen helping her aunt. In the course of the story we learn about Maria’s long, unhappy marriage to Walter, that she has worked in a clothes boutique for many years and recently been made redundant, that she has a married sister and a handful of close women friends, that when she was younger she had jilted her boyfriend Eduard in favour of Walter, and that her pet frog Otto froze to death when she put him in the fridge to hibernate. The childless Maria lives in a block of flats and now spends most of her days sitting in the market place watching the world go by.

Anna Weidenholzer’s well-received novel is remarkable for its understated, pared-down diction which perfectly captures Maria’s demeanour as she veers between melancholy and mirth. She has a precise eye for small details which bring Maria’s humdrum, disappointed existence so vividly to life. This is a minutely observed paean to the human condition as it is experienced by apparently unremarkable people, illuminating the daily rituals, the failure of real communication, the absurdities, banalities and vicissitudes of the lives under scrutiny.

Anna Weidenholzer was born in 1984 in Linz and now lives in Vienna. She studied Comparative Literature in Vienna and Wroclaw, Poland. Weidenholzer has been published numerous times in literary magazines and anthologies and has won many awards, such as the Alfred- Gesswein-Prize (2009), the Residency Stipend at the Schloss Wiepersdorf (2011), the State Grant for Literature (2011/2012), Stadtschreiberin of Kitzbühel (2012) and the Reinhard- Priessnitz-Prize (2013). Her debut novel Der Platz des Hundes (2010) earned her a nomination for the European Festival of the Debut Novel in Kiel in 2011. Her novel Der Winter tut den Fischen gut was nominated in the fiction category of the Leipzig Book Fair Prize in 2013.

Residenz Verlag was founded in 1956 in Salzburg. Early publishing lists concentrated on fine art and non-fiction titles. During the 1960s a fiction list was added, and leading Austrian authors including H.C. Artmann, Thomas Bernhard, Barbara Frischmuth and Peter Handke published their first work here. German and Swiss writers were gradually included, followed in the 1980s by international authors in translation. The non-fiction list includes books on contemporary history as well as monographs of nineteenth- and twentieth-century artists and books on music, theatre and architecture. Since 2001 the Residenz Verlag has been publishing literary and artistic picture books and fiction for young readers, too, in the Nilpferd imprint.