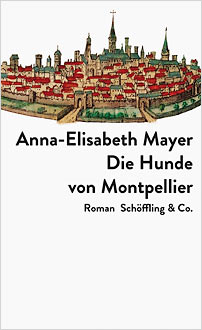 The Dogs of Montpellier is a thrilling portrait of the life of Guillaume Rondelet, a university professor of medicine in 1550s Montpellier.

In this era, being a doctor mostly meant reading and commenting on authoritative books; dealing with actual human bodies was out of the question, and better left to the ‘wound doctors.’ Not so for Rondelet, who realises that understanding illnesses and saving people’s lives depends on a thorough study of all living beings.

At the beginning of the novel, the reader encounters Rondelet dealing with insults that have been smeared on the front door of his house. We do not know why or what has happened, except that his wife is lying sick in bed and his servants are torn between loyalty and suspicion. Only his young sister-in-law Catherine supports him.

A few months previously, Rondelet had moved into Catherine’s house with his wife Jeanne, Catherine’s sister. While his pregnant wife finds it hard to accept her husband’s scientific drive, Catherine asks to participate in the scientific life of the doctor. She learns to read and write, and then slowly becomes his archivist and assistant. Rondelet has also begun to look for corpses for dissection in the university.

After the mother of a thief who has been executed and is due for dissection protests that she wants the body of her son returned intact – to no avail – Rondelet’s reputation plummets. The whole town seems ready to lynch him, until a further tragedy strikes: his wife gives birth to a baby son who dies immediately after birth. In spite of his extreme sadness and pain, Rondelet decides to take his son’s corpse to the lecture hall for a secret anatomy class with a few selected students – without informing his wife.

The rumour spreads fast through town, effectively turning the doctor into a pariah. Now we understand the meaning of the insults painted over the house door, and of the dog that follows him around – it receives the entrails of the corpses after the lectures have finished.

This historical novel is laconic and concise, and has a quasi-scientific and yet poetic tone. There is little artifice in Mayer’s writing, as if Rondelet’s matter-of-factness had spread through its pages.

Anna-Elisabeth Mayer was born in 1977 in Salzburg, and currently lives in Vienna. She studied philosophy and art history and subsequently taught literacy programmes for immigrant women. She continued her studies at the German Literature Institute of Leipzig. She has recieved various literary awards, and has been published in a number of periodicals and anthologies. Fliegengewicht was her first book publication, for which she received the Alpha Literary Prize 2011.