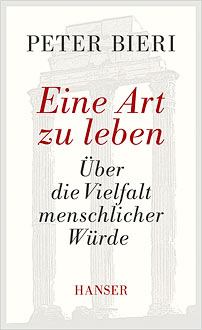 Dignity is an essential measure of human life. But what do we actually mean when we talk about dignity? Peter Bieri’s new book is an eloquent discussion of this central facet of our lives. Bieri approaches the subject of dignity through everyday examples from life and literature. In so doing he demonstrates how dignity is much more than an abstract concept and constitutes a particular way of being in the world: a pattern for how individuals think, experience things and act.

Bieri identifies three conceptually distinct yet interrelated dimensions of human dignity concerning the way in which an individual is dealt with by others, how an individual deals with others, and how an individual relates to themselves in terms of their sense of self-worth. The first two dimensions involve interpersonal relationships whereas the third addresses how the value we place upon ourselves influences how we see others, which in turn affects how others perceive our dignity. The book investigates these three dimensions of dignity in eight chapters which discuss how dignity has a bearing across the spectrum of our day to day experiences.

Bieri’s book could be read as a complete manifesto for a balanced and respectful way of life and yet its readable style and clear structure also make it possible for readers to dip in and out of the text in order to focus on how dignity relates to a particular sort of experience. In his discussion of how dignity is involved with the elementary human need for independence, Bieri explains the roles of work and money in determining dignity. In the chapter on honesty detailed examples are given to show how lies, whether simple or complex, affect the dignity of both the liar and the person being lied to. The chapter on encounters introduces dignity in relationships, covering its manifestation throughout the course of a relationship. It addresses topics such as commitment, stability, manipulation, deception and abuse. The discussion of intimacy is concerned with the dividing line between privacy and openness, which varies from culture to culture and from person to person. Finally, Bieri considers how our acceptance of our mortality shapes our dignity, which accordingly influences our conduct during times of illness or hardship.

While this title will certainly be of interest to an academic audience, Bieri’s accessible and wide-ranging book is written in plain language which reinforces its considerable popular appeal.

Peter Bieri was born in 1944 in Bern. He studied philosophy and classics and was Professor of philosophy at Bielefeld, Marburg and the Free University of Berlin. Carl Hanser Verlag published his book Das Handwerk der Freiheit (2001), as well as the novel Nachtzug nach Lissabon (2004) and the novella Lea (2007), both penned under the pseudonym of Pascal Mercier.