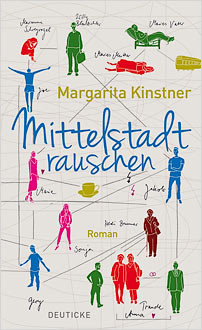 Downtown Static is a story about interpersonal connections and serendipity that takes place in Vienna, the classic Mittelstadt, or ‘middle city’ that is neither a metropolis nor a small town, and in Graz, Austria’s second-largest city. The arresting plot takes some surprising turns as the five protagonists’ lives become intertwined: Marie is a school teacher who meets the love of her life, the charismatic bohemian Joe, in a psychiatric ward. When Joe jumps off a bridge and drowns in the Danube, his suicide is filmed by Gery, a lonely film student who is searching for the perfect subject for a documentary and has always been secretly in love with Marie. In the first weeks after Joe’s suicide, neither Gery nor Marie can shake off the thought that Joe is still present. But both come to realise that they need to move on and connect with new people. Gery befriends a pensioner called Hedi while delivering meals on wheels to her, and Marie meets Jakob, a PhD student of astrophysics who happens to be Hedi’s grandson. Marie falls in love with Jakob’s reliability and down-to-earth simplicity.

While all the characters in the novel are convinced that they are in charge of their own stories and relationships, it emerges in the end that Joe had orchestrated an encounter between Marie and Gery in his will. He instructed an acquaintance to invite them both to the Prater – Vienna’s famous historic amusement park and fairground, and a place associated with surreal and miraculous events. Marie and Gery relive moments with Joe and eventually find themselves as the only audience for a special Punch and Judy show, in which they are told Joe’s views on life and death and are given the keys to his flat. Joe is playing Cupid from beyond the grave.

Gradually – and intriguingly for the reader – the life-stories of the main characters as well as the more peripheral figures evolve to become part of one big story of familial or romantic connections. The many characters are portrayed in great depth and each person’s story has something unique to capture readers’ imaginations. Downtown Static stands out among contemporary city novels for its fresh, dynamic presentation of Vienna which counters Viennese stereotypes.

Margarita Kinstner was born in Vienna in 1976. She has previously written for literary magazines and anthologies. Mittelstadtrauschen is her first novel.