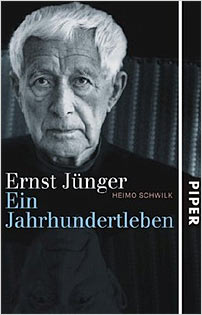 Ernst Jünger (1894-1998), writer, fighter, beetle-sighter, was one of the most contradictory and controversial figures of the twentieth century. In the course of his long career he could count Borges and Celan among his admirers, alongside Hitler and Goebbels. He was a war hero and a dandy, a fervent nationalist and an equally fervent anarchist; he was accused of helping to pave the way for Nazism and upheld as an outspoken critic of the Nazi party. He wrote autobiography and fiction, essays and aphorisms: his eight decades of writing include works on his experience in the trenches, a book about beetles, another about drugs, 5 000- odd pages of diaries, and essays on everything from military theory to metaphysics.

Schwilk, a journalist who knew Jünger personally and has had unlimited access to the Ernst-Jünger-Archiv in Marbach, has written a well-researched and highly readable book. The young soldier’s passionate obsession with war and death is dwelt on at some length. But the author is also quick to point out the inconsistencies – and so Jünger’s bloodthirstiness is mitigated by his sporadic war weariness, and later put into perspective by his horror of automatised warfare. Jünger’s decisions to join the foreign legion and to volunteer to fight in the First World War, along with his experiments with drugs and his love of nature and literature are all interpreted as various forms of escapism, ways of seeking refuge from his lifelong sense of being an outsider. The biography begins and ends with Jünger’s funeral and with his conversion to Catholicism shortly before his death. It also includes some curious sidelights, such as its subject’s father’s views on women. What a man needed in a wife, opined Jünger père, was simply good teeth: beauty and intelligence were better avoided.

Although Jünger is by no means as well-known in the English-speaking world as in Germany, there is plenty here to interest English-language readers. Recent re-issues of The Glass Bees (nyrb, 2000) and of Jünger’s most famous work Storm of Steel (Penguin Modern Classics, 2004) indicate that he is not just read on the Continent. And for reasons as ambivalent as Jünger’s own life, this is, of course, a period of history that never fails to fascinate.

Heimo Schwilk, born in 1952, is the author of numerous books on politics and literature. He has been studying the life and works of Ernst Jünger for many decades, publishing several works on him, including an illustrated bibliography in 1988. In 1991 he was awarded the prestigious Theodor-Wolf-Prize for outstanding journalism. Heimo Schwilk is editor-in-chief of Welt am Sonntag; he lives in Berlin.

Piper Verlag was founded by Reinhard Piper in 1904. The firm published many leading contemporary authors, a tradition followed by the founder’s son and grandson. After 1945 the programme expanded to include philosophy and non-fiction. Piper Verlag now includes the imprints Malik, Ernst Kabel and Piper Fantasy, and has been part of the Swedish group Bonnier since 1995. Authors include Ingeborg Bachmann, Hape Kerkeling, Annette Pehnt, Gaby Hauptmann, Jakob Hein, Walter Moers and Robert Löhr.