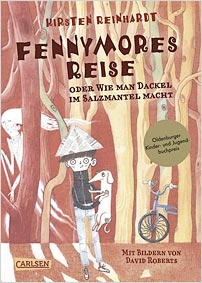 In this very impressive debut novel – tipped as a nominee for the Deutscher Jugendliteraturpreis, the most renowned German prize for children’s literature – eleven-year-old Fennymore has been living alone, with only his bicycle for company, ever since his parents disappeared three years ago. The bicycle thinks it is a horse, and Fennymore helps his aunt hunt dachshunds, to make her favourite dish: dachshund in salt crust.

When his aunt dies of dachshund poisoning, Fennymore rescues a box of prized possessions from her flat and his bicycle takes him to meet a strange gentleman called Hubertus, aka Death. A few years before, Hubertus became tired of his work and struck a Faustian bargain with the local mayor, Doctor Clockgood. In exchange for being allowed to work only in the local retirement home, he had to take two souls whose time hadn’t yet come: Fennymore’s parents.

Young readers will be absolutely engrossed by this charming and witty piece of classic storytelling, as Fennymore tries to outwit Clockgood and find out why he wanted his parents, who were inventors, dead in the first place.

Kirsten Reinhardt was born in 1977 in a picturesque little village near Lueneburg. Now she lives and works in Berlin. Her manuscript of Fennymore’s Travels or: How To Make Dog in Salt Crust was awarded the Oldenburger Kinder- und Jugendbuchpreis in 2009. Kirsten Reinhardt loves reading comics, and has never eaten a dog in her life.

Carlsen Verlag was founded in 1953. After the success of the PETZI series in German daily papers Forlaget Carlsen/ Denmark was prompted to establish a German subsidiary, trading under the name of CARLSEN Verlag. The Pixi booklets, launched in 1954, proved to be a hugely successful venture. Since then CARLSEN has published more than 1,300 titles with a total print-run of more than 250 million copies.