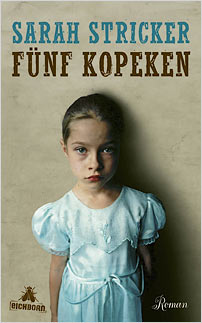 Anna, the narrator of Five Kopeks, recalls her life story in a series of flashbacks. Her tyrannical grandfather’s obsession with his time as a PoW in a Soviet camp and his brutal attempts to instil a sense of duty into his ugly daughter do not sound like the ingredients of a funny novel, and yet Stricker’s gift for storytelling has the reader in stitches. The grandfather abhors superficiality and encourages his daughter’s assiduity in school while discouraging any attempts she makes to look nice. His wife surreptitiously tries to rouge her daughter’s cheeks or to give her nicer glasses but her husband always seems to have the upper hand. The ugly daughter turns out to be a child prodigy but is emotionally immature long after she becomes an adult. There are excruciatingly funny passages recounting the daughter’s first late-night disco and pubescent experiences.

There is a bracing clarity in Stricker’s language as she describes how Anna’s mother denies her feelings for the man who becomes her husband and stumbles into an amour fou for the chauvinistic Ukrainian-Jewish Alex. On one occasion she spends a night in a hotel with Alex behind her husband’s back. Nothing goes to plan and the episode is full of dramatic tension. The next morning she muses aloud about what they might call a child if they got married, and is taken aback by Alex’s revelation that, despite being a non-believer, he would never marry her because she is not a Jew. The ensuing discussion ranges across the barriers which prevent a converted Jew from being accepted as Jewish, and what it means to be Jewish in contemporary Germany.

Sarah Stricker was born in 1980 and wrote for the taz, Vanity Fair and numerous German newspapers and magazines, such as Süddeutsche Zeitung, Frankfurter Allgemeine Zeitung and Neon. In 2009, she was given a scholarship to go to Tel Aviv where she stayed to work as a foreign correspondent, reporting for the German media about Israel and the Israeli media about Germany. Fünf Kopeken is her debut novel.

Eichborn is the publisher of Look Who’s Back by Timur Vermes, a novel playfully asking what would happen if Hitler were alive today. It turned out to be THE German novel of the year. Published in September 2012, it instantly entered the top ranks of the best-seller list where it is still sitting (nineteen weeks as number one). Translation rights have been sold in more than thirty territories (World English: Maclehose Press/Quercus). Many works published by Eichborn have been translated into English, including A Woman in Berlin by Anonymous, The Old Child, The Book of Words and Visitation by Jenny Erpenbeck, The 13 ½ Lives of Captain Bluebear by Walter Moers, W.G. Sebald’s The Emigrants, The Rings of Saturn and Vertigo as well as Ice Moon, Silence and The Winter of the Lions by Jan Costin Wagner. Eichborn became a division of Bastei Luebbe, Germany’s largest independent publishing group in 2011, and continues to discover and to establish original and exciting authors’ voices.