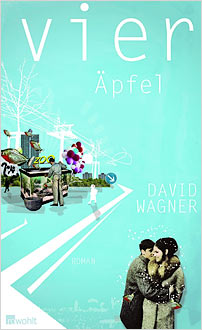 In a charmingly original read, this new novel by David Wagner starts as the protagonist begins his shopping routine in the fruit and vegetable section of his local supermarket where the realisation that the four apples he has selected weigh exactly one kilogramme prompts him to consider whether today is some kind of special day. It transpires not to be, however, but just a day like any other, the weight of the apples being determined by the drive towards standardisation in modern agriculture rather than cosmic coincidence.

After considering intensive methods of fruit and vegetable production, the narrator ponders the history of the shopping trolley before moving on to buy frozen pizza. Boldly declaring that he has tried every flavour of this dish sold in the shop, he suggests that however carefully the packaging is opened, the plastic wrapping removed and the product placed in the oven, it is ultimately a sad food. This is something he first guessed when he saw a photograph of how pizzas are prepared in a factory by women wearing light blue plastic gloves and hair nets, and is one of many reflections on the origins of mass produced food and the disparity between reality and advertising images.

So the protagonist continues through aisles filled with frozen Black Forest Gateaux, frozen spinach, organic vegetarian Bolognese, mushroom ravioli, fresh fish, sausage, cheese, salt and bread, to shampoo, washing powder, and sundry deodorants, nosing into other people’s trolleys as he goes. He considers the invention of the fish-finger by Clarence Birdseye, and the history of the supermarket itself, describing Saunders’s Piggly-Wiggly Supermarket in Memphis, Tennessee, which opened in 1916 to promote the revolutionary idea that customers should serve themselves.

Running through these ruminations is the second strand of the novel, a love affair that has come to an end. Various sections of the supermarket serve to remind the protagonist of his lost girl. He remembers how she wrote shopping lists, her views on pasta and sauce, their last visit to the cinema together, how the smell of washing powder evokes her, a holiday they took in Venice, how, now that she has gone, he no longer returns glass bottles to the supermarket – and the abortion that led to the end of their relationship.

Thoughtful, thought-provoking, and a cogent comment on contemporary society.

David Wagner was born in 1971. In 2000 his debut novel Meine nachtblaue Hose (‘My Midnight-Blue Trousers’) was published to great critical acclaim. He has been awarded a variety of prizes, including Walter Serner Prize and the Dedalus Prize for Contemporary Literature. He now lives in Berlin.