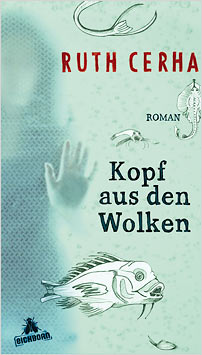 This is an absorbing debut, a remarkably tense mystery novel skilfully combining episodic structure with elements of surprise, exotic locations, and colourful characters. Its swift pace, lively description, and vivid insights all contribute to a truly memorable read.

Anna leads a nomadic existence: unable to make sense of her much-loved brother Franjo’s death, she flees her Viennese home, and we first encounter her some years later in Cairo. We follow Anna through Cairo and on to New York, as she pieces together what happened to Franjo. Cerha only gradually reveals that almost everyone in the book has had a trauma of some sort to deal with, and this constantly sheds new light on Anna’s own dilemma and generates interest as to how well she will succeed. By the end of the novel, this process is still incomplete; but it has made important advances, and has settled on a promising trajectory for the future.

During the course of the novel, Anna’s perspectives and the reader’s are turned upside down. Franjo is indeed the main victim, but not in the way we’d expected: glamorous and gifted, he has actually been at odds with the world from day one, and his suicide seems like a logical though dreadful development. Anna’s mother, forever playing happy families and the helpless subject of her husband and children, summons the courage to embark on a new relationship, and turn their ramshackle house into a home. Similarly, Anna’s miraculous reunion with her lover Paul in New York is not a dénouement, but rather a moment when she gets back on the rails.

They both have some way to go: Paul to look after his now ailing father, and to show Anna more of how she has hurt him in the past, to be less superhuman; and Anna to progress from re-connections with her family and admitting her need for other people, to possibly finding how to live close to Paul. Meanwhile, they feel their way by writing to each other.

Cerha creates a vivid sense of life and place: each episode, large or small, adds a piece to the jigsaw, and brings alive concrete details of scene and speech, alongside the dreams, visions and nightmares in the mind of the traumatised children and troubled adults. The novel stops, but its storyline still has momentum and its implications continue well beyond the last page. Hard to put down, even harder to forget.

Ruth Cerha was born into an artistic family in Vienna in 1963. Her musical training began at the age of four, with the piano, violin and composition. She attended the grammar school for music in Vienna and then studied Psychology before working as a musician and composer with several bands and for the theatre. Cerha has two children and lives in Vienna. Kopf aus den Wolken is her first novel.

Eichborn AG was founded in 1980, and is regarded as a young and bold independent publishing house. Its strong and diverse list includes fiction and non-fiction, humour and reference books. It has two subsidiary lists: Die Andere Bibliothek (‘The Other Library’), founded by Hans Magnus Enzensberger, and Eichborn Berlin, which focuses on literary debuts in German. Many titles originally published by Eichborn have been translated into English, including W.G.Sebald’s The Emigrants and The Rings of Saturn; A Woman in Berlin by Anonymous (winner of the 2006 Schlegel-Tieck award); Karen Duve’s Rain; Walter Moers’ The 13½ Lives of Captain Bluebear and Jan Costin Wagner’s Ice Moon.