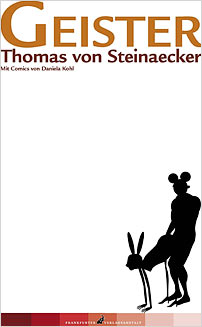 The crux of this highly original novel is the extent to which its principal character, Jürgen, is marked by the loss of his sister, Ulrike, who disappeared at the age of six before he was even conceived. Throughout his childhood and adolescence, his parents’ grief, as well as their overintense way of trying to overcome it, shapes his life. After an escapist stay with the yoga guru ‘Master Pratick’ in Auroville, India, he returns to Munich and eventually finishes training as a chiropractic practitioner. At first all goes well. He and his wife Monika run a very successful rehabilitation clinic and after their split he starts work at a spa in Prien. A key incident, however, has occurred right at the start of the book: the screening of a documentary film about the disappearance which Jürgen himself has attended. Now a former patient, Cordula Mass, who recognized him from the film, sends him an envelope containing a selection of what she calls ‘Ute Comics’. The comic strips, Cordula explains, are inspired by the disappearance. She adds that she produces a comic strip every week based on the doings of Ute, the fictional Ulrike.

Jürgen, at first reluctant to look at these comics, comes to find them fascinating and unsettling but also deeply moving. He even agrees when Cordula asks if she may include him as a character. His interest in the comic strip turns into an infatuation with the character Ute and eventually with Cordula. The pair meet and in time start an affair. Jürgen takes his daughter Clara, now a teenager, to stay with Cordula in Berlin. When Clara tells him she fails to understand why he did not tell her of the affair earlier, he tries to explain that his foolish behaviour was all a part of his mourning over a sister he never knew, but Clara is still upset and at this point the affair and the book both end.

With its flashbacks and passages looking forward to future events, Geister is a highly original work, part psychological study, part crime novel, while Daniela Kohl’s comic strip illustrations explore an unconscious and alternative world. The disappearance of a child is topical, alas, but the complexities and insights of this book stand in their own right.

Thomas von Steinaecker was born in 1977 and lives in Munich. His first novel, Wallner beginnt zu fliegen (‘Wallner Begins to Fly’), published in 2007, was awarded the Aspekte Prize for the best first novel of its year and was shortlisted for the 2007 German Book Prize. He read a specially commissioned short story at the Guardian Hay Festival this year in the Scritture Giovani event.

The Frankfurter Verlagsanstalt is an independent publishing house headed by Joachim Unseld. With a focus on new German fiction by young authors and some translated contemporary foreign fiction, it has secured an excellent reputation in the ten years or so since it was launched: ‘A solid reputation for literary pearls’ – Süddeutsche Zeitung. ‘A clear profile in international and German fiction. Unseld personifies the kind of publisher that has become a rarity in his generation, one who combines a nose for literary discoveries with a savvy business sense. Here editing is still done by the boss.’– Frankfurter Allgemeine Zeitung