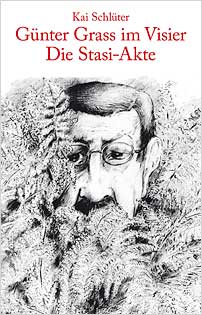 Journalist Kai Schlüter’s detailed and fascinating exploration of Günter Grass in the context of his observation at the hands of the East German authorities is more than an addition to Grass’s biography. It is also a compelling depiction of the Stasi apparatus, revealing both how they exerted a terrifying force, and how they often misread things to an almost comical extent.

The Stasi monitored Grass closely from August 1961 until the demise of the GDR government almost thirty years later. But Schlüter is at pains to emphasise the unreliability of the files themselves, even though access to them greatly benefits our understanding of the GDR and the inner workings of the regime. There were a number of misunderstandings, oversights, falsifications and downright lies, motivated not only by the desire to incriminate Grass, but also by competition and conflicts within Stasi departments. In addition, some informers offered false information, either in an attempt to protect the person they informed on or to exaggerate their own importance.

It is precisely the untrustworthiness of the files which makes this book so interesting. Schlüter presents extracts from them alongside commentary from Grass and his colleagues and friends, comparing the official record with the personal memories of those involved. The Stasi’s frustration at the inadequacy of their hold over Grass is consistently evident; as a West German resident and an internationally renowned author, he was able to escape extreme action such as imprisonment due to the scandal it would cause.

The reports of the meetings he took part in between East and West German writers are particularly thought-provoking; while the Stasi clearly suspect that these were motivated by political dissidence, they did not become focused on political issues until as late as 1978, when a number of the East German authors had been imprisoned. Rather, Grass was particularly interested in whether the literary languages in East and West Germany differed substantially.

This is a book that makes for compelling reading, a valuable account of a fascinating period in recent German history. Besides the absorbing insight into Grass’s own history and engagement in the East-West literary world, the Stasi documents also provide an enthralling reflection of the gradual breakdown of its power.

Kai Schlüter was born in 1956 and studied German and Social Sciences at the University of Göttingen. In 1983 he completed a doctorate, before working as a journalist for newspapers and the radio. Since 1986 he has been a journalist at Radio Bremen, ARD Correspondent in Washington DC and London, and Managing Editor of Nordwestradio.