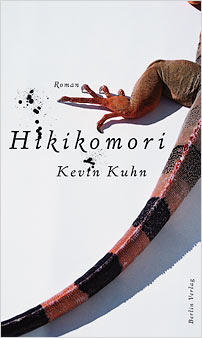 The Japanese word ‘Hikikomori’ was coined to describe the reclusive withdrawal of young adults from all forms of social interaction. Kevin Kuhn’s impressive debut novel offers unsettling insights into the mind of one such young man.

Hikikomori charts a six-month period in the life of Till, during which he increasingly retreats from the physical world into a virtual universe of his own creation. Till’s decision to live out his life in his bedroom, with only his computer and smartphone for company, is triggered by his exclusion from school. His parents are unaware of Till’s situation until it is too late. His father runs a successful plastic surgery practice, while his mother sells beautiful but useless objects in her shop when she feels like it, retiring to the family home to drink prosecco when she doesn’t. Till’s friends live comfortable, middle-class lives with equally easy-going parents. Kuhn portrays them through Till’s eyes, an outsider looking in, observing their teenage experiments with alcohol, drugs and sex with growing detachment.

It is Till’s younger sister who comes up with the Hikikomori diagnosis when their parents seem at a loss. She is unable to alleviate his isolation in any meaningful way, however, and actually adds to Till’s problems when her boyfriend starts to take Till’s place at the family dining table. Till is acutely perceptive with regard to his social withdrawal, describing himself as ‘floating’ above the lives of his family and friends. Kuhn alternates between the third- and firstperson narrative voices in order to highlight Till’s divided personality: on the one hand seeing himself objectively from the outside, and on the other retreating to an introspective, inaccessible sense of himself. In another contradiction, Till repeatedly states his determination to sort his life out for himself, while his ‘Hikikomori’ status renders him totally dependent on his parents for food and shelter.

The online world which Till creates is described in rich, verdant terms which contrast sharply with the stark, grey surroundings of his bedroom. It is with a sense of foreboding that the reader notes the region of this world termed ‘Suicide Forest’. But in Till’s invented world there is no death, only unending staircases and eternity. Perhaps this is what Till expects to find when he leaves his bedroom for the final time, this time by jumping from the window. Hikikomori leaves us to reflect on the hostility of our world and what it can do to those who cannot tolerate it.

Kevin Kuhn was born in Göttingen in 1981 and currently lives in Berlin. He studied philosophy, art history and religious studies in Tübingen as well as creative writing and cultural journalism in Hildesheim. Since 2010, he has been a lecturer at Hildesheim’s university. Kevin Kuhn has lived abroad for long periods of time, for instance in Alaska and Mexico City. He received a stipend from the Munich Literature House and won the Gargonza Arts Award in 2012. Hikikomori is his debut novel.