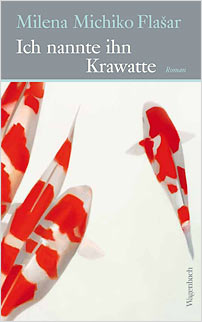 Flašar’s charged and affecting novel is predominantly a story of people talking about things usually kept quiet – of failure, illness and disability – and how they are shaped by society’s pressures.

I Called Him Tie centres on a chance encounter in a park: Hiro, a twenty-year-old Japanese recluse (or hikikomori), meets a much older ‘salaryman’ (i.e. an office worker). The setting itself marks them as outsiders, unlike others of their kind who keep to their rooms or offices. Alongside their tentative, budding friendship, stories of what brought them there unfold. These are simultaneously stories of their bruised and damaged acquaintances and friends, in whose downfalls they are not entirely innocent parties – relationships that have ultimately taught them that what you don’t do in life can take on far more significance than what you do. Common to each case is the pressure to succeed, to be perceived as average and not to stand out in the ‘wrong’ way.

Hiro’s experiences have led to his current reclusive existence, while the salaryman cannot bring himself to tell his wife he has lost his job. Through his friendship with the salaryman, Hiro gradually becomes able not only to venture further afield but also to imagine ‘entering society’ again. Their last meeting ends with Hiro’s promise to cut his hair and the salaryman’s promise to tell his wife about his redundancy. Taking off the tie of the title which, for Hiro, ‘wore him’ and not vice versa, he leaves.

The novel has a delicately-woven, lyrical quality, and says a lot in a few words, allowing the reader to complete the story arcs and the unfinished sentences that increase in number towards the end. While we know almost from the beginning that Hiro is a recluse and that the salaryman has lost his job, the narrative follows the notion that ‘everyone is an accumulation of stories’. Everyday objects increasingly evoke the potential sadness of ordinary people’s lives, and Flašar delivers her symbolism – such as the tie that comes to represent the salaryman’s whole existence – with a light touch.

The novel’s pared-back style and universal themes mark it out as the potential breakthrough novel for this talented young writer. I Called Him Tie is not only a tale of modern Japan but also, and perhaps above all, of ordinary lives.

Milena Michiko Flašar was born in 1980 in St. Poelten (Austria) and studied Comparative Literature, German literature and Romance literatures in Vienna and Berlin. She lives as a writer in Vienna. In 2010 she was nominated for the Klaus-Michael-Kuehne-Prize.

Verlag Klaus Wagenbach is an independent publishing house founded in 1964 in Berlin. Its programme comprises contemporary and twentieth-century literature, cultural history, the history of art, and politics. A particular area of interest is Italian literature, alongside translations from the French, Spanish and English and original German-language works. Among its authors are A. L. Kennedy, Erich Fried, Sergio Pitol, Jorge Edwards, Andrea Camilleri, Natalia Ginzburg, Luigi Malerba, Manuel Vázquez Montalban, Michel Houellebecq, Peter Burke, Natalie Zemon Davies and Stephen Greenblatt. The house has been called ‘the independent publisher for wild readers.’