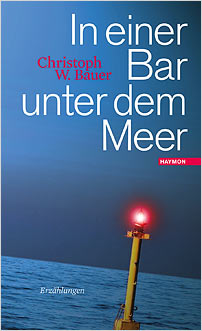 Christoph Bauer is an acclaimed poet and novelist whose latest literary venture is a collection of twenty short stories with a quirky originality that seals his reputation as a literary craftsman.

Bauer’s stories revisit the themes which he has handled so masterfully in his poetry, focusing on particular instances of loss, loneliness and frustration. They are infused with melancholy and yet retain a lightly humorous touch which adds to their charm. Bauer’s unfortunate characters find themselves in familiar predicaments, but often respond in unexpected ways. There is the overweight stamp collector whose motivation for starting an extreme weight-loss programme is to ensure he does not die before his mortgage is paid off, a desperate lover who poses naked in public in a bid to attract the attentions of his beloved, and a hairdresser whose husband is addicted to online shopping. Some characters recur in subsequent stories, generating a pleasurable sense of recognition for the reader.

These striking tales are both subtle and brilliant, narrated in a sharp prose which effortlessly navigates a wide range of narrative styles. The reader is immediately drawn into each story by its arresting opening, and remains hooked as the plot unfolds. The remarkable title story takes place in a slightly dystopian future and recounts an unconventional betrayal. The protagonist is a straight-laced civil servant who has not slept with his wife for two years and mourns the loss of passion in his marriage. One Friday evening when his wife has gone away for the weekend, he leaves his face at work by mistake and decides to rent a different one. In an outlet store for last season’s faces, he chooses an old Ernest Hemingway model and observes how people react to him in completely different ways. Breaking with his usual routine he ends up in a bar where, to his absolute horror, his wife appears. Not recognising her husband she begins to try and seduce him, which is brilliantly framed as both the best thing and the worst thing which could happen to him. The story concludes with a clever twist which is completely unexpected.

Christoph W. Bauer was born in 1968 in Carinthia and grew up in Lienz, Eastern Tyrol and Kirchberg, Tyrol. He lives and writes in Innsbruck and has written lyric poetry, prose, essays and audio plays (Und immer wieder Cordoba, ORF 2006; Franzens Feste, ORF 2010), and translations.

Haymon Verlag was established in 1982 by the historian, journalist and author Michael Forcher as a non-fiction publishing company. The Haymon Verlag is named after a giant named Haymon who, according to an old legend, founded the Stift Wilten monastery near Innsbruck in the eighth century. It was one of the first cultural centres in the region that later became known as the Tyrol. Since 1988, it has primarily published German-language and international literature. Haymon Verlag has been a subsidiary company of the Studienverlag since September 2004.