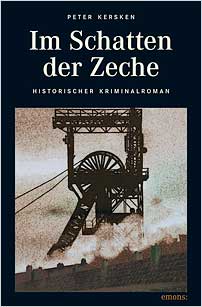 Kersken’s star is clearly rising. This is the second of his gripping crime novels set in the Ruhr area of Germany and the action takes place just over forty years after his promising debut thriller, Death on the Ruhr, which has already attracted a wide and loyal following.

In the Shadow of the Colliery opens just after the failed miners’ strike of March 1912. Despite the recent turbulence at the colliery, the citizens of Sterkrade are looking forward to the annual Corpus Christi fun fair. However, the murder of a local miner and of a dwarf from a troupe of travelling performers threatens to spoil the early summer frivolity and also to ruin the mayor’s hopes of the Kaiser granting the town its charter. Detective constable Johann Zomrowski’s investigation into the untimely demise of the two men brings him into close contact with all sections of Sterkrader society – warts and all.

The tense division between the miners, the rich pit owners and also the immigrants who have arrived in the region in large numbers provides all manner of motives for the murders. But not even the use of the latest criminal investigation techniques, such as flash photography at the scene of the crime, can reveal the perpetrator.

Zomrowski takes the journey to Bonn in an attempt to shed more light on the background of the visiting dwarf and stumbles over some details that only fall into place later on. Ultimately, it is the story of Wilhelm Voigt – the infamous ‘Captain of Köpenick’, an impostor masquerading as a Prussian soldier – that acts as the catalyst to solving the case. The travelling troupe, it turns out, was home to not one, but two nearly identical dwarves. The murders were actually committed by two people – one as revenge, the other in error.

Kersken, whose own ancestral history played a strong part in the scene-setting and backdrop, succeeds in bringing the young pit town to life for the reader and convincingly captures the spirit of the age. The narrative style is fluid and the plot development complex, yet well balanced. The boundaries between historical fact and fiction, between the ‘Gaslight’ and the ‘Golden Age’, are expertly navigated. A highly enjoyable read that, like Alex Mabon’s Murder down the Medway, will appeal to historical crime fans everywhere.

Peter Kersken was born in 1952 in Oberhausen in Germany’s Ruhr area. He studied Philosophy and Literary Studies in Freiburg and Cologne and worked as an editor for a daily paper in Cologne. Today, he lives as a freelance author in the Eifel region of Western Germany.
See www.peterkersken.de

Emons Verlag was founded in 1984 by Hermann-Josef Emons in Cologne. Today the company is market leader in the Regional Mystery sector, with forty different series. Besides mystery stories the publisher’s list has always included other titles with a regional background, such as historical suspense novels, guide books, atlases, illustrated books and non-fiction books concerning culture, history and the documentation of National Socialism. In 1995 Emons published Frank Schätzing’s Novel Death and the Devil, which has become an international bestseller. In 2010 Emons Verlag will publish about 100 books, among others the new titles of Nicola Förg and Hannes Nygaard.