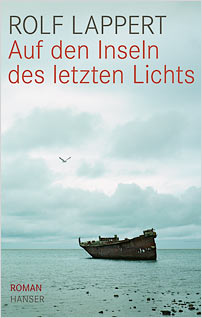 Prize-winning Swiss author Lappert has composed an ambitious and intelligent novel, compelling and yet subtle. Much is left unspoken or only hinted at, and questions remain unanswered. Lappert’s precise prose conveys not only very finely observed detail but also the complexity of human relationships, the simultaneous violence and tenderness of people’s feelings for one another.

In the prologue in Ireland, a small girl, Megan, silently watches as her mother drives off with a man who is not her father. Inside the house, her baby brother Tobey begins to cry. Megan gets up to go in, but is held back: she has a rope around her waist and has been tethered like a dog.

We are then catapulted forward, to find the adult Tobey looking for Megan. He arrives on a tiny Philippine island where derelict laboratories are being reclaimed by nature and a dilapidated villa is inhabited by a motley crew that is all that is left of the International Primate Research Centre, now a shady drugs business. Tobey does not find Megan; he is told she has drowned, and even exhuming her body reveals no further clues.

Interspersed with Tobey’s story are letters from Megan. From these we glean something of her somewhat eccentric life: her love of animals, her vegetarianism, and her involvement with a group of animal rights activists which culminates in her decision to investigate the island.

Megan’s part of the story makes you want to start reading all over again to compare her experiences on the island with Tobey’s. There is an elegiac tone, because her tale is rich with characters and we never learn what happens to most of them. We do, however, learn the fate of Ester, Megan’s lover, who is shot after Megan discovers secret laboratories on a second island, where several primates and even a child are being kept in appalling conditions. At this point, in a significant twist in the plot, Megan exchanges rings with the dead Ester, which means that the body Tobey had thought was his sister’s is in fact Ester’s.

One of the great merits of the novel is the parallel portrayal of two closed communities: rural Ireland and the nameless Philippine island. In both places, time seems to stand still, the characters appear trapped in a web of deceit, and there is no knowing what the truth is. An engrossing read.

Rolf Lappert was born in Zurich in 1958 and now lives in Listowel, Ireland. He trained as a graphic artist, but went on to co-found a jazz club. From 1996 to 2004 he worked as a scriptwriter. His most recent publication with Hanser was Nach Hause schwimmen, which won him the inaugural Swiss Book Prize in 2008.