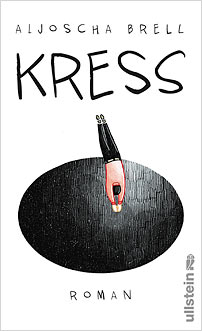 The combination of acerbic humour and visceral tragedy in Aljoscha Brell’s debut is reminiscent of fiction by Jonathan Coe and Marina Lewycka. Brell brings a fresh, playful voice to the German literary scene, sure to be a hit with Englishlanguage readers.

Kress, the novel’s eponymous protagonist, is a narcissist and an eccentric. He is the owner of a pigeon – who is coincidentally his best friend – and regards many of his fellow Berlin citizens as mediocre irritants, blocking his pursuit of greatness as a Goethe scholar. Kress aspires to become an assistant to Professor Schleicher – a suave older man with a predilection for pralines – but is thwarted when the position goes to Madeleine instead, a woman on whom he has a crush.

Kress is drawn into an uneasy friendship with Madeleine’s best friend, Mona, who encourages him to banish his inhibitions by doing things like stealing a book and taking up smoking. When Madeleine refuses to go out with Kress his first response is to have a one-night stand with Mona. But his obsession with Madeleine deepens and he starts stalking her, convinced that she is having a relationship with Professor Schleicher. He progresses from watching her every move to letting himself into her apartment with a key he steals from her letterbox. One day he discovers a positive pregnancy test and immediately suspects she is pregnant.

Meanwhile Madeleine has been trying to persuade Kress to contact Mona, who urgently needs to speak to him. Kress, his mind solely focused on Madeleine, thinks nothing of it. Alone in his mould-stained flat, he decides things are hopeless and attempts to commit suicide by gassing himself, before being interrupted by the postman who is irate at having to scale two flights of stairs to deliver Kress’s mail to an overflowing mailbox. Kress clears the box for him and notices a hand-written letter from Mona. In a cruel twist of fate it emerges that Mona is pregnant – and Kress is the father. She is informing him that she wants to have an abortion. The letter looks to be a month old, and Kress immediately races round to her apartment. After initial disbelief, Mona takes Kress in, admitting that she hasn’t had the abortion. There is a happy ending of sorts in which Kress reveals his first name, Julian – the first time he has ever opened up to anyone. He will move in with Mona and attempt to be the best he can be.

Aljoscha Brell was born in 1980 and lives in Berlin. He leads a team of web developers at a Berlin IT company. Brell received a stipend from the Literary Colloquium Berlin as part of their Author’s Prose Workshop, and in 2009 was awarded an Alfred Döblin scholarship from the Berlin Academy of Arts. Kress is Brell’s first novel.