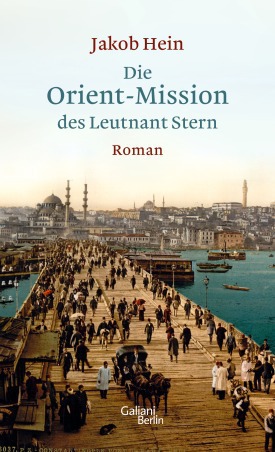 Jakob Hein’s latest novel is a fictional account of Germany’s attempt to encourage the Middle-Eastern Muslim population to fight against Britain and her allies during the First World War. This extraordinary tale will fascinate readers with an existing interest in this area as well as those encountering it for the first time.

Lieutenant Stern’s Middle Eastern Mission tells an important story of the German-Ottoman alliance and the position of Muslims in the First World War. There are also references to rising anti-Semitism and the Armenian genocide. The novel opens with the outbreak of war, when Edgar Stern is on holiday in Belgium with his family. Surrounded by people from across Europe, he and his companions find it hard to believe that they are all suddenly supposed to be enemies, but they make their way home to Germany immediately.

The book is narrated by figures who played different roles in the German-Ottoman alliance. The German plan was to go to the East and unite the Muslims against the British and other allies, in the hope that the additional numbers would lead the Germans to victory. Edgar Stern leads the mission along with the dragoman Karl Emil Schabinger Freiherr von Schowingen. Posing as a circus leader, Stern takes a group of French prisoners of war from Arabic-speaking countries – amongst them Morocco and Algeria – to Constantinople to encourage the Sultan to announce that all Muslims should now fight for the Germans.

Part of the story is told by Tassaout, a Moroccan who finds himself in the ‘circus’ with his friend Aderfit. Arriving in Turkey after several tricky border crossings, the circus members are welcomed as heroes. However, the differences between the various nationalities, cultures and religions soon become clear, and the Germans slowly realise that the Muslim population is not necessarily united as one. Disappointed by the lack of success, and shaken by the devastation he sees caused by the Armenian genocide, Stern’s mission comes to an end, and he and Schabinger go their separate ways. The prisoners are set free but not helped to get home, and the Germans are posted to new diplomatic positions around the world.

This is an unusual, captivating novel which will introduce readers to a lesser-known dimension of First World War history through an engaging cast of characters and their entertaining exploits. Lieutenant Stern’s Middle Eastern Mission is reminiscent of Alex Capus’ writing for the deftness with which it blends real historical events with first-class storytelling.

Jakob Hein was born in 1971 in Leipzig and now lives in Berlin. He holds a PhD in medical sciences and works as a psychiatrist and writer. Since 1998 Hein has been part of Berlin’s literature scene, performing at Kaffee Burger club and other cult locations. He has published fourteen books to date, including the bestseller Herr Jensen steigt aus (2006) and most recently Kaltes Wasser (2016). He also writes theatre plays and screenplays.