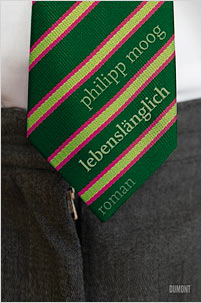 The setting of this stylish first thriller is Munich and the killer, through whose diary the story is told, is a short, fat, bank teller with thinning red hair and piggy features, full of pathological selfloathing and a misfit both outside the bank and within. Hopelessly he lusts after two pretty female colleagues, but the only person who lusts after him is, unfortunately, the sexually aggressive Marlene, whose bawdy physicality and insistent pleas he finds repulsive. Right from the start of the book the reader knows he is in sure authorial hands, debut effort though this is, as the first of the bank teller’s victims disappears over a precipice, helped on his way by a hefty clunk on the back of the head with a rock. It is one of the pretty girls’ boyfriends, and the other’s will soon be dead, too.

Inevitably the police investigations reach the bank, and as the circle of suspicion is about to narrow down to the narrator, Marlene, in a last-ditch attempt to cement their relationship, throws him an alibi.

With its claustrophobic settings, skilfully ambiguous ending and terrific pacing, this page-turner’s a winner.

Philipp Moog was born in 1961. An actor and screenwriter, this is his first novel. He lives in Munich.