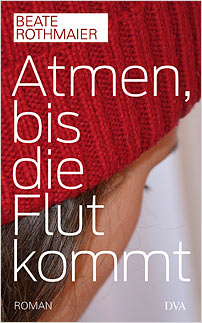 Breathing Till the Tide Comes In is an honest and unflinching novel about the immense challenges of bringing up a disabled child. The fluid prose is interspersed with graphic sections, forming a highly effective dual-perspective narrative, and affording the reader unique insights into the mind of the novel’s graphic designer protagonist.

When Konrad embarks on a tumultuous affair with the impulsive and enigmatic Paule it all feels like a lot of fun. The two go travelling together and try to break free of social convention. Everything changes abruptly when Paule becomes pregnant. Unable to deal with a newborn baby she tries to abandon it several times, even before she realises that there is something the matter with her child. One day Paule disappears for good and Konrad is faced with the almost unbearable situation of having to bring up his disabled daughter Lio on his own, without a regular income or any help from his family. As he realises the severity of Lio’s disabilities and that she is always going to need special care, the struggle takes him to breaking point. He can barely make time for his graphic novel projects and becomes increasingly disillusioned.

After years of hospital rounds and therapy sessions, dealing with innumerable everyday challenges and alienation from his peers, he meets and falls in love with Josefine. She understands his situation and is the only person capable of reawakening a sense of joy in him. Yet can he, who has given up so much of himself, really claim a piece of happiness? Does he need to decide between two lives, without hope of reconciling the two? Eventually Konrad drives his teenage daughter to the coast, ‘to see the snow falling’ as he puts it to her. But Konrad’s real aim is to leave Lio and regain the longed-for freedom of his old life.

Rothmaier’s novel draws on her own experiences of looking after a disabled child and tackles difficult questions head-on, in all their moral complexity. It asks about the notion of normality and what it means to fall outside of it, as well as the idea of absolute freedom and whether this is an impossible ideal. The fine writing is deeply realistic but also lyrical, paying attention to the tiniest of details. Small moments of happiness, such as a late-night drink on the balcony after Konrad’s daughter has gone to sleep, are pinpointed in few words. Rothmaier is an assured writer with a style all of her own

Beate Rothmaier was born in 1962 and studied German and Romance languages and literature. She has worked for various theatres and publishing houses, and as an advertising copywriter and freelance author. She received several awards for her debut novel Caspar (2005), including the Friedrich Hölderlin Promotion Prize.

Deutsche Verlags-Anstalt has an outstanding reputation as one of Germany’s leading non-fiction publishers, with an emphasis on history, memoirs, biography and current affairs. DVA also has an exquisite list of literary fiction. Among the bestselling authors are Marcel Reich-Ranicki, Sebastian Haffner, Martin Doerry, Ian Kershaw, Anne Enright and David Wroblewski. Deutsche Verlags-Anstalt has been a part of Verlagsgruppe Random House since 2006.