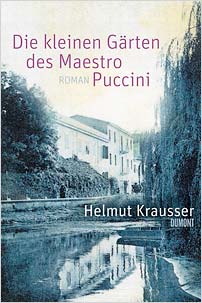 It is 150 years since Giaccomo Puccini’s birth, and to celebrate the event that admirable writer Helmut Krausser has written a novel covering ten years of his life. His chosen period is the first decade of the 1900s, but with flashbacks to earlier events. There is also a glance forward to the composer’s death in 1924 during treatment for throat cancer, the result of lifelong chain-smoking, so we get an overall picture of his career.

The novel is in three parts, each named for a woman who had a significant role in his life. The kleine Gärten of the title are metaphors for his extramarital adventures. Book I is entitled Cori (Corinna), a variation of the real name of Puccini’s young mistress at the turn of the century whom Krausser, working with Puccini expert Dr Dieter Schickling, has identified. A girl of humble origins, Cori met Puccini when she was in her mid-teens, they were lovers for some time, and he half-promised marriage. Then he dumped her and even had her shadowed by detectives to prove that she herself was sleeping around.

Book II is named after Sybil Seligma, sister of the novelist Ada Leverson, who was his long-term platonic friend. Finally Book III, Doria, concentrates on the notorious persecution of the maid at the Puccinis’ villa in Torre del Lago. Unjustly accused of sleeping with the composer (he was in fact sleeping with her cousin) Doria took poison and died a lingering death, by which Puccini was shattered. Moving from the passionate to the professional in other parts of the book, we hear of the disastrous first night of Butterfly and are shown Puccini on his deathbed agonizing about how to finish Turandot.

Although Puccini was not such a deeply nasty piece of work as some consider Wagner, it’s quite easy to dislike him – serial adulterer, addict of the high life and fast cars (which then achieved the amazing top speed of about 15 mph), wholesale slaughterer of birds. But Krausser makes him surprisingly sympathetic, though never indulgently so. Our advice: buy now. The anniversary is not till December.

Helmut Krausser was born in 1964 in Esslingen, Baden- Württemberg. His novels Der große Bagarozy (The Great Bagarozy) and Fette Welt have been adapted for the screen starring Jürgen Vogel. Eros, his last novel, will be published in English in 2008 by Europa Editions. He lives in Berlin.

Rights to this work already sold to:
SUDA (Korea)