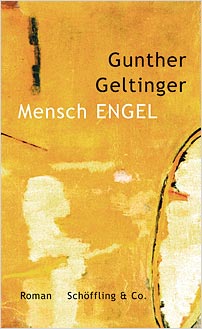 Geltinger’s language is what makes this novel remarkable – the plot itself is pretty straightforward. We meet Leonard Engel a few days after he has finished his Abitur: a hot summer in the Frankonian countryside, in which the nineteen-year-old can finally live out his frustrated sexual drives. He has an affair with Marius, a dark-skinned beau with curly hair, and then with Volker, a prim and proper teacher’s pet from his year. At the end of the summer, Engel moves to Vienna, leaving Volker behind for his sister Feline and eventually Tiago, a Brazilian male prostitute. In the whirlpool of his emotions, the reader is catapulted through time, until he hears of Volker’s suicide and returns home.

If the storyline of this novel has something of the rock’n’roll swagger of Sturm und Drang, its style is pure Deutscher Expressionismus. The language is rich and rewarding to read, the constantly changing sentence construction varies the narrative’s pace, and Geltinger has a way of making familiar things sound strange. He also takes liberties with the conventions of narrative layering: the story is told in intense episodes, cutting out the mundane journeys between places, and jumping back and forth in time. Symbolism is what ties together the stream of words, not plot: the various bodies of water that Engel has to cross or swim through, and the blood that seems to be pumping through his young body with heightened pressure. There is also a touch of magical realism (Engel can talk to animals, or so he thinks), and a meta-textual element (every now and then Engel the writer steps back from Engel the character to question if things really happened as they are described).

Mensch Engel is certainly a remarkable debut. It is packed with linguistic and narrative invention, and in the hands of a translator who could take up the challenge of Geltinger’s prose (not to mention the undertones implied in its title, and even in the first name of Boris, the love of Engel’s life), there is potential here for a sleeper hit comparable to such other gay coming-of-age stories as Luke Sutherland’s Venus a Boy or Hanif Kureishi’s Buddha of Suburbia.

Gunther Geltinger, born in Erlenbach am Main in 1974, studied script-writing and drama in Vienna and at the Media Academy in Cologne. He took part in the prose authors’ workshop of the Literarisches Colloquium Berlin (LCB), and was awarded the Rolf Dieter Brinkmann Scholarship of the City of Cologne. Mensch Engel is his first novel and was shortlisted for the 2008 Aspekte Prize, the most highly regarded award in Germany for a first novel.

Schöffling & Co. has a simple credo: the focus is on the authors. It has gained the reputation of being a ‘publishing house that plays a significant role in the shaping of Germany’s literary future’ (SPIEGEL online). Founded in November 1993, Schöffling & Co. has since emerged as one of Germany’s most innovative independent literary publishing houses with a tightly-woven international network. An atmosphere of mutual confidence and esteem and an unceasing commitment to its authors and their works provide the basis for a fruitful literary relationship. New German voices are recognised and published alongside established and famous names, while authors in translation include Sadie Jones, Olga Tokarczuk, Jennifer Egan, and Miljenko Jergovic.