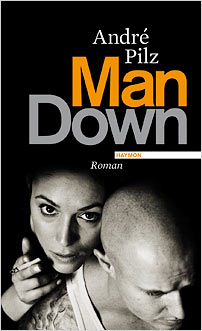 Marked by a gritty realism and blunt use of language, Man Down is a disconcerting critique of modern, capitalist society. Pilz shocks his audience with a disturbing insight into the life of a person who falls lower and lower in society and feels he cannot do anything about it; but the empathy between the reader and the central character is one that grows and grows.

Kai worked as a roofer but suffered a serious fall caused by fatigue, and his boss has yet to pay him for his last few months’ work. He borrows money but has no way of paying it back, so he is ‘offered’ another way: drug running. He attempts to find honest work with other roofing contractors but, his appearance now hardly resembling that of an honest worker, he is rejected. So he continues ferrying drugs, vowing to stop once the debt is paid off. Eventually, finding no way out, in a chilling climax to the story, Kai seeks revenge on his first boss, the cause of his troubles.

Pilz’s skilful manipulation of themes of injustice, unaccountability, selfishness, loneliness and betrayal make this book a highly relevant account of society’s underclass and the sometimes desperate situation of immigrants in a new country.

André Pilz was born in 1972 and now lives in Munich and in the Vorarlberg region of Austria. During his studies he worked as a guitarist, postman, museum attendant, and airport worker. He has been a writer since 2007 and has published two novels.

Previous works include:
Bataillon d’Amour (2007); No llores, mi querida – Weine nicht, mein Schatz. Ein Skinhead- Roman (the book appeared in 2005 and was staged by the Deutsches Theater Berlin in 2007)

Haymon Verlag was established in 1982 by the historian, journalist and author Michael Forcher as a non-fiction publishing company. The Haymon Verlag is named after the ‘Giant Haymon’ who, according to an old legend, founded the Stift Wilten monastery near Innsbruck in the eighth century. It was one of the first cultural centres in the region that later became known as the Tyrol. Since 1988, it has primarily published German-language and international literature. Haymon Verlag has been a subsidiary company of the
Studienverlag since 1 September 2004.