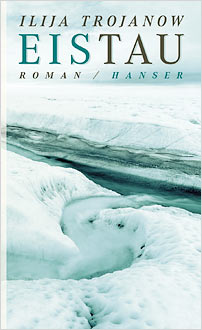 Melting Ice is an activist’s book that recognizes the problem of activism – an angry, powerful, and often funny book. Zeno Hintermeier, a glaciologist, is working as a lecturer on a cruise ship in the Antarctic. He is surrounded by his beloved ice – and passengers and journalists who, for all their concern about the environment, will soon return to their usual lifestyles. Hintermeier, on the other hand, is plagued by a nightmare in which he is sitting on a rock, clutching a handful of melting ice. Things come to a head during an art installation. The passengers line up on the ice to spell out an SOS. For Hintermeier, only a genuine distress signal could do justice, so he invites the crew to join the formation, returns alone to the cruise ship, and sails off. When the ship is found, there is no sign of the hijacker, just a notebook, the text of which we have been reading. Hintermeier’s narrative, full of arresting images and poetic descriptions, is interspersed with memories of his childhood, his failed marriage, and the end of his academic career. These alternate with short, untitled and fiercely poetic chapters written as single sentences that provide an angry, energetic and anonymous commentary.

Ilija Trojanow was born in 1965 in Sofia, Bulgaria, grew up in Kenya and now lives in Vienna. His work has won numerous awards, most recently the 2008 Berlin Prize for Literature, and has been translated into several languages.