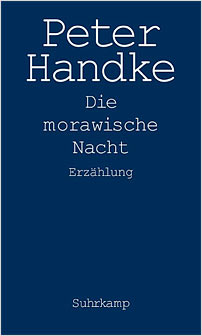 Die morawische Nacht is a boat, perhaps once a hotel, moored at one point or another on the River Morava, the home of the ex-author, an alter (and sometimes not so alter) ego of the writer Peter Handke. On this boat there arrive one night friends from various stages of the ex-author’s life and career. They listen to the stories he has to tell, sometimes interrupting, sometimes taking up the narrative themselves. Also on board is a mysterious and beautiful woman – are she and the ex-author a couple, or are they not? – who also takes part in the storytelling. The story of the night involves a journey, a long circling movement from an enclave that might be Kosovo, through Europe and back to its starting point. The journey takes perhaps months, perhaps much longer, and on the traveller’s return the enclave no longer exists, or at least it is no longer an enclave of the old Balkans. In other words the author, Peter Handke, is saying goodbye to ‘his’ Balkans, ‘his’ Yugoslavia, as a place.

Starting on a battered bus in a Balkan bus station, and taking in Spain, a spa town in the Harz Mountains, and Austria, where the ex-author was born, this journey is enlivened by some wonderful – and also some very odd – scenes. In an inn, The Inn of the Nameless, close by the Cemetery of the Nameless (which does exist) the ex-author makes acquaintance with The World Congress of Jew’s Harp Players. Arriving at last at his native village he finds himself, like Odysseus, unrecognized – even his brother’s dog at first bares its teeth. But in the end, after a night full of dramatic meetings, even violence, comes reconciliation.

Handke, it can be argued, is one of the defining writers of our time, but it’s years since a UK publishing house put out anything by him, and that neglect predates his defiant, obstinate defence of the former Yugoslavia which ended with him more or less condoning Milosevic. If he’s mentioned at all in the British arts supplements it’s as the writer of the film Wings of Desire. Yet Die morawische Nacht is a haunting and wonderful book indeed. Time to bridge the gap?

Peter Handke was born in 1942 in Griffen, Austria, and now lives near Paris. His books are translated into thirty-six languages.