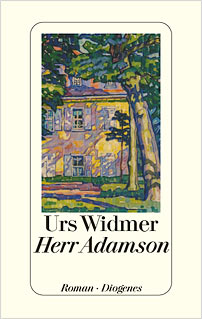 ‘When I first met Herr Adamson I was eight years old’: it is into that childhood world of imagination and excitement that the grand old man of Swiss letters, Urs Widmer, leads his willing and charmed reader. The pages thrum with warmth and gentle humour as we follow the young boy into the deserted garden of a nearby villa. It’s the perfect place to be a Red Indian Chief, and to play hide and seek with a new playmate who is sitting on a garden bench one summer’s day. The little boy is drawn instantly to this old man who doesn’t talk down to him and instead encourages his flights of fancy. The boy looks forward to the secret encounters and he grows fond of the old man: together they visit the house he had lived in before the bombs fell. It is only when the boy trips and is about to fall against Herr Adamson, only to fall right through him, that he realises: the old man is dead, a ghost figure, and his guide to the kingdom of the dead when his own hour has come. Everyone has a guide, a person who dies at the very instant he or she is born – though surely not always as unalarmingly and likably as Herr Adamson, our narrator muses, suddenly feeling his age and catching a glimpse of the familiar figure.

Urs Widmer was born in Basel in 1938 and studied German, Romance languages and literature, and history in Basel, Montpellier and Paris. After completing his doctorate in 1966 he worked for Walter Verlag and Suhrkamp, before co-founding ‘Verlag der Autoren’ in 1969, a publishing house which is owned by the authors themselves and focuses on texts related to the performing arts. Shortly afterwards, he wrote his first book, Alois. He now lives and works in Zurich as a writer.