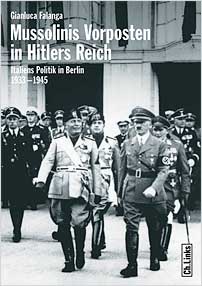 ‘Looking at events soberly and free of any sentiment, I have to admit that my unwavering friendship for Italy and Il Duce can go down as one of my mistakes’. So Hitler is recorded as saying in his bunker in spring 1945, and the story of the unhappy alliance of the two dictators is a fascinating one indeed. Gianluca Falanga recounts it with the emphasis on personalities, particularly of the four Italian ambassadors to Germany who were variously en poste during those years. His story also contains a prologue in which the last of them, Filippo Anfuso, who has vowed to follow Il Duce even unto death, journeys in the spring of 1945 through a ravaged European inferno that might have been imagined by Dante to a Berlin reduced to ruins and awaiting the final onslaught of the British and Russian armies.

In this sinister mix of politics and personalities there are many sidelights and little-known details to offset the main theme. We are all aware of Hitler’s brutal power-game. Now we can see how Mussolini, perhaps the one major statesman in Europe in a position to talk to him, was unable to change anything. An almost classical tragedy.

Gianluca Falanga was born in Salerno, Italy, in 1977. He studied literature in Turin and is now a translator, journalist, author and bookseller in Berlin. His many publications include Italien in Berlin (2006) and Berlin 1937. Die Ruhe vor dem Sturm (2007).