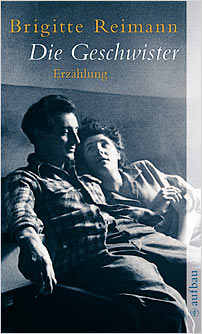 A heartfelt view of life in East Germany by one of the socialist state’s most talented writers:
Steph Morris introduces
Brigitte Reimann’s Die Geschwister.

‘I will never forgive you for this,’ Uli says to his sister Elisabeth. What she has done to him is only revealed later; first the narrative circles back. Elisabeth is the one who has been hurt: her beloved brother has announced he is leaving for the West in two days. Die Geschwister (literally ‘the siblings’) is the story of a beautiful relationship and the forces which threaten it, when human emotion and ideology collide.

It is 1960 and the border between East and West Germany has already been closed, with West Berlin the only loophole. For Elisabeth the GDR still represents the chance to build a more just society – despite frustrations with the system. And it is home. For Uli there seems no room for manoeuvre. Uli is an engineer; Elisabeth an artist. As part of a scheme for bringing art to the people and the people to art, she works part-time at a Kombinat, a collective industrial plant, where she has a studio and runs painting classes for the workers. She still has run-ins with the system, clashing with an older painter she sees as unfairly favoured by the party, commissioning his hideous daubs at the workers’ expense. When he then denounces her to the Stasi she is forced to defend herself, a challenge the outspoken Elisabeth rises to.

Brother and sister have returned home for the Easter weekend, to the house where they grew up, played together, Hansel and Gretel, made their first forays into dating, vetting each others’ choices. Now they go drinking, walk round town, lounge around in their pyjamas using their childhood nicknames. They have an older brother but he has fled to the West already. Elisabeth and her mother meet him in West Berlin. Elisabeth accuses him of taking his East German training to cash in on West German pay; he accuses her of peddling the party line. The argument is highly authentic and reflects thousands of discussions which took place in those years. When their mother cannot stand it any longer, she tells Elisabeth to wait at the checkpoint for her. The sense of otherness and disorientation Elisabeth feels walking through the West Berlin streets is acute. Elisabeth, the painter, has an eye for light and colour, capturing images; Brigitte Reimann, the writer, a feel for every possible sense and sensation, for smells, weather, mood, and above all emotions.

Elisabeth is engaged to Joachim, a loyal party member and believer in the system. They are opposites who attract, Joachim a dependable type that the impulsive Elisabeth can rely on. And the party can depend on him too. Or can it? All three are caught in an intractable dilemma when Elisabeth, getting nowhere in her attempts to convince Uli to stay, fetches Joachim to help. And this is what Uli will never forgive his sister; normally if Joachim heard someone was planning to leave the country it would be his duty to inform the authorities. Instead Joachim agrees to try persuasion. When, exhausted, Elisabeth tells Uli just to leave – and not to bother keeping in touch – Uli replies that he can’t; tomorrow he will be on the list of suspected defectors, he’ll be stopped at the border. She assures him that he won’t, thereby compromising Joachim. But by now the two men have bonded. Uli is reading a book on cybernetics and Joachim suggests they meet to discuss the topic some time over a drink. Some time? Uli has seen the light; he will stay.

This has been viewed as a contrived ending, bent to conform to state ideology and ensure the book was published. Yet – aside from the fact that few writers anywhere evade ideological bias and many make compromises to get into print – for dramatic purposes this outcome is perfect. Instead of leaving, Uli remains, but the damage has been done; the rift between the siblings is now emotional, not geographical. He will never forgive her for betraying him; she will never forgive him for wanting to leave her. And the narrative shoe-horning exemplifies the book’s subject, the clash between human needs and political expediency. The tension is palpable, and hardly stops the book from being a good read. If the text sometimes appears torn between conflicting feelings and beliefs, then so was its author, and so was society.

With Die Geschwister Brigitte Reimann captured the mood of a generation and became a cult figure in an increasingly turgid culture thanks to the honesty and energy of her prose and her lifestyle. When the book was published, in 1963, the prominent GDR architect Hermann Henselmann wrote to her to say ‘your descriptions reflect our life together so closely, you have now become a member of our family and we are waiting eagerly to see what you write next.’ For us, now, her writing remains one of the few frank literary evocations of what it really felt like to live in that era.

Steph Morris is a writer and translator living in Berlin and London. www.steph-morris.com

Like her heroines, Brigitte Reimann (1933-1973) was impetuous and vocal, addressing issues and feelings otherwise repressed in the GDR. She believed passionately in socialism, yet never joined the party, remained with her second husband, writer Siegfried Pitschmann, yet pursued a series of affairs. Sometimes clashing with the system, ultimately it needed her talent and unlike Pitschmann she was consistently published. Like Elisabeth, she followed the state’s call for artists to leave their ivory towers and engage with the workers, moved to the new town of Hoyerswerda to work parttime at a nearby industrial plant and run writing classes there. As a result she wrote Ankunft im Alltag, a socialist coming-of-age novel which spawned a whole genre. In 1960 her brother left for the West and she began writing Die Geschwister. Her final masterwork Franziska Linkerhand explores many of the same themes but the prose is more mature, expansive and Proustian, interspersed with flashbacks, the tone more hard-hitting. It was the last novel she wrote before dying of cancer and is now available uncensored. Brigitte Reimann was a free spirit, a role model for independent women and an inspiration to all, selling widely in both Germanys. Like her novels, her diaries, published in two volumes, make exciting reading, by turns racy, passionate, bold, bitter – but above all life-affirming.