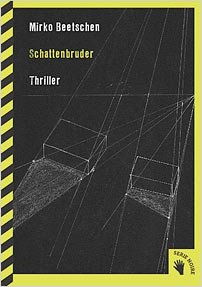 Mirko Beetschen’s slow-burning psycho-thriller keeps readers guessing throughout.
Samuel Bach is a thirty-seven-year-old architecture critic for a leading national newspaper in Zurich. Having parted from his friend Miriam after an evening’s drinking, he decides to have one final drink before heading home. This is a mistake that colours the next four months of his life. He orders a beer and finds himself drawn to Raymond, and the night ends with the pair sleeping together at Samuel’s flat.

While Samuel is not sure about their encounter, Raymond clearly wants more and refuses to take no for an answer. First he begins to appear in all of Samuel’s favourite haunts: the bookshop, the outdoor pool, the café, the local organic grocery store. Next he turns up at Samuel’s office with a gift, and soon he is inundating him with requests to meet. Samuel disconnects the phone and effectively becomes a prisoner in his own home. The reader looks on in horror as Samuel’s mental equilibrium begins to falter. It transpires that Raymond is not at all who he says he is, and that Samuel’s life may be in imminent danger. Beetschen’s flawless characterisation brings this tightly-plotted read to life.

Mirko Beetschen was born in 1974 and grew up near Lake Thun. He studied English and American Literature as well as media science in Bern. He worked as an editor for Archithema Verlag in Zurich and continued his studies in the field of architecture and design. Mirko Beetschen lives and works in Zurich and in the Bernese Oberland.

Bilgerverlag was founded in 2001 by Ricco Bilger and specialises in contemporary Swiss literature. Authors include Katharina Faber, Urs Augstburger, Kaspar Schnetzler, Urs Mannhart and Christoph Simon. Ricco Bilger opened his Zurich bookshop in 1983, and ten years later, another bookshop in the mountain spa town of Leukerbad, where he went on to found the successful Leukerbad Literature Festival.