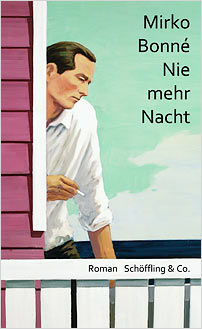 Mirko Bonné’s latest novel takes the reader on a journey through European history which is by turns moving, disturbing and delightfully amusing.

Narrator Markus Lee is an artist who is commissioned by an art magazine to sketch the bridges that played a crucial role during the D-Day landings. Markus drives to France with his fifteen-year-old nephew Jesse, who plans to stay with his best friend’s family while they are looking after an abandoned hotel on the coast. But it soon becomes apparent that this is no simple road trip. The journey is overshadowed by the loss of Jesse’s mother Ira – both her son and her brother are still reeling from her recent suicide. The drive to Normandy is full of tension as Markus and Jesse make awkward efforts to connect with one another while avoiding the one topic they really need to confront. Bonné’s expert handling of the relationship between the adult narrator and his teenage nephew produces many wryly humorous moments. In the dream-like atmosphere of the Hotel L’Angleterre, what was supposed to be a week-long stay ends up lasting for a month. The experience marks a turning point in Markus’ life and comes to have lasting significance for the other characters.

Night No More offers an unsparing and engrossing account of the liberation of France during which countless young men who were scarcely older than Jesse lost their lives. As the narrator tries to complete his sketches of the D-Day bridges, he struggles to absorb the enormity of the events of World War II and to render that history as an artist. Meanwhile, Markus finds himself strongly attracted to Jesse’s best friend’s mother, leading him to reflect on his early sexual experiences and on his adolescence more widely in what has become the fraught context of his family history. The memory of his beloved but troubled sister Ira looms large, generating unobtrusive reflection about the ways in which individual lives and national histories intersect with one another.

Bonné’s novel approaches an extraordinary chapter of European history from a fresh and productive angle. In a perfectly pitched narrative laced with skilfully observed dialogue, Bonné brings to life an appealing cast of characters whose personal stories suggest new ways of looking at the D-Day landings.

Mirko Bonné was born in 1965 in Tegernsee and lives in Hamburg. He has translated poetry by Keats, e.e.cummings and W. B. Yeats, and has published several novels and volumes of poetry. His novel Wie wir verschwinden was longlisted for the German Book Prize.

Schöffling & Co. has a simple credo: the focus is on the authors. It has gained the reputation of being a ‘publishing house that plays a significant role in the shaping of Germany’s literary future’ (SPIEGEL online). Founded in November 1993, Schöffling & Co. has since emerged as one of Germany’s most innovative independent literary publishing houses with a tightly-woven international network. An atmosphere of mutual confidence and esteem and an unceasing commitment to its authors and their works provide the basis for a fruitful literary relationship. New German voices are recognised and published alongside established and famous names, while authors in translation include David Albahari, Jennifer Egan, Miljenko Jergović, Juan Gabriel Vásquez, Clarice Lispector or Amy Waldman.